None of this is theoretical. I have had 100% of my savings and income in crypto since 2013. Over 7 years I have made dozens of bitcoin of transactions every month. I still pay staff in bitcoin, I paid for my last holiday in bitcoin that I won betting with bitcoin!

I was a bitcoin true believer and have built this website around bitcoin, I have every motivation for wishing it to succeed.

I am more excited than ever about the positive changes I thought bitcoin would bring to my own life and society as a whole. Now I realize those changes will come from multiple competing cryptos, with bitcoin taking an increasingly small role.

In 2015 bitcoin was the best at everything, how about now?

The bitcoin scaling debate turned toxic in 2015. That is the landmark year in the story of bitcoin’s continuing product failure. At that time bitcoin was the best currency for everything, including these top 15 key areas;

In 2019 what is left? In which of these 15 most important use cases and characteristics is bitcoin still king?

This one is debatable and it depends on your risk appetite.

If you are a low-risk saver and want stability, you are better off with a stablecoin.

If you have a medium risk appetite, bitcoin could still be the best crypto for savings.

If you are a high-risk saver and want growth, you are better off with cryptos that are getting more useful and increasing their market share, bitcoin is doing the opposite.

Many payments-focused cryptos like dash, Litecoin and bitcoin cash provide a better experience for making payments compared to bitcoin with its high fees and long wait times.

Bitcoin’s advantage is the number of people who accept it, but that advantage is shrinking fast. Previously most merchants who accepted crypto only accepted bitcoin, now most of them accept multiple cryptos.

Bitcoin is no longer the best crypto for spending.

Bitcoin is no longer suited to arbitrage trading or any trading that involves quickly and cheaply moving money between exchanges. However, for other types of trading bitcoin is more or less equal with Ethereum and tether for having the most trading pairs and highest liquidity.

On balance, bitcoin is still one of the best, perhaps the equal best, crypto for trading.

For a long time, you have been able to get higher lambo moon gains from new crypto projects. Bitcoin is no longer the best crypto for speculating.

Bitcoins fees are now too high for it to be useful for microtransactions.

With advances in stablecoins like Tether, TrueUSD, Maker and Gemini coin, bitcoin is no longer the most stable crypto.

With advances in privacy coins like Monero, Zcash and Zero coin, and with bitcoin development stagnating, bitcoin is no longer the most private crypto.

Bitcoin is still the most secure network but for all practical purposes, it’s the equal most. Yes, bitcoin is more immutable than, for example, Litecoin, but there are no use cases for which Litecoin is not immutable enough.

With its high fees, long wait time and developers who don’t prioritise ease of use, bitcoin is no longer the easiest-to-use crypto. Cryptos like dash and stellar are easier.

As the incumbent, bitcoin retains the most network effects by default but its lead is shrinking.

Of the top 15 most important things that bitcoin did better than any other currency in 2015, it is still equal to best in only 7 of them. That is what you call a product failure.

The failure is reflected in bitcoin’s market share. Even after the explosion of thousands of other cryptos in 2015, bitcoin had around 90% market share, it’s now around 50% and long-term trending lower. 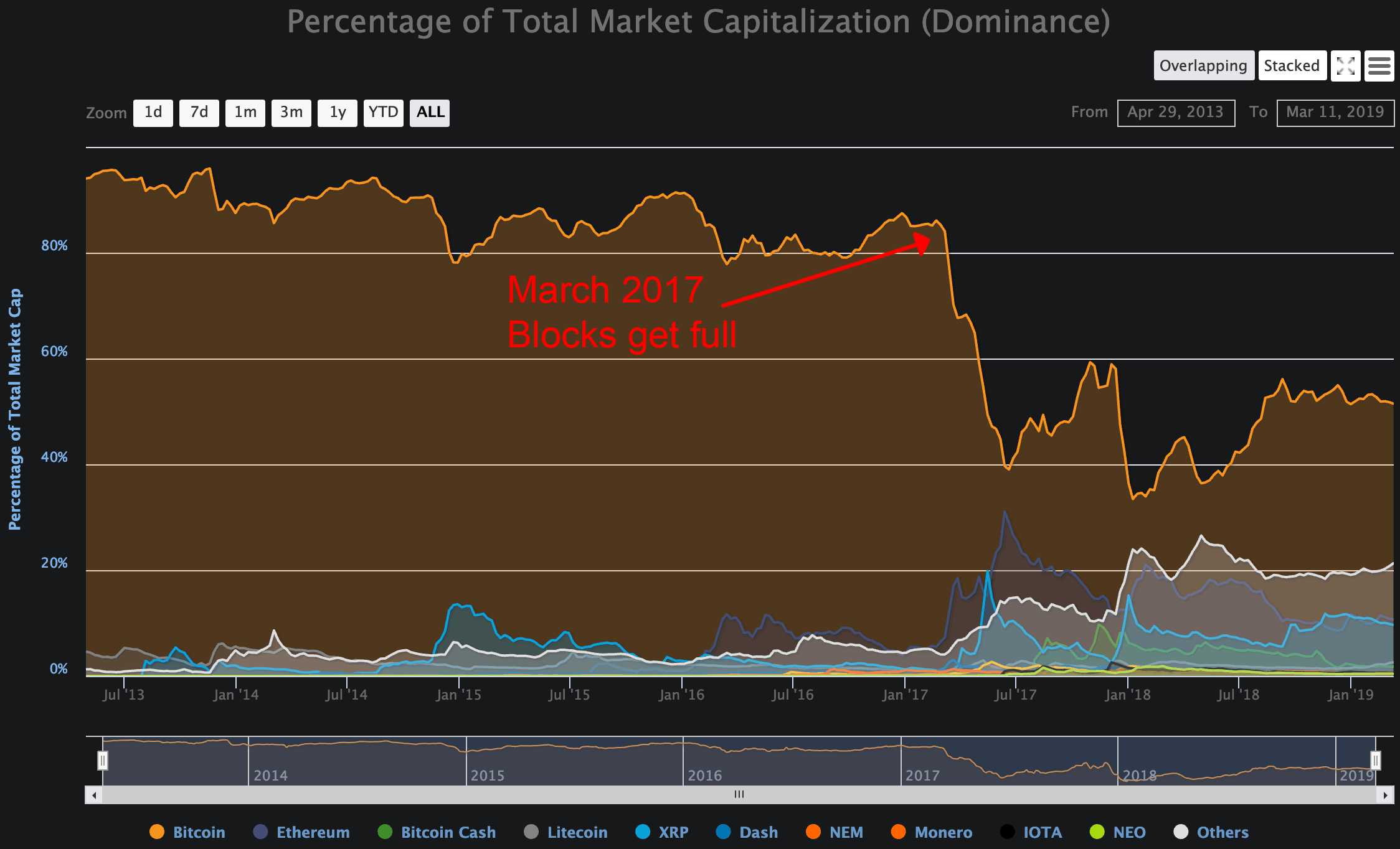 Bitcoin is even getting worse compared to banks!

Domestic transfers are now free and bank fees in general have gone down. Speed and ease of use have improved and online banking has gotten a lot better as well. Banks suck but they can improve, it seems bitcoin can’t.

In that same time period, bitcoin has gotten slower, more expensive and more difficult to use! Before blocks got full, all the sportsbooks listed on this site had 0 confirmation betting. Now it’s 1-3 confirmations and confirmations take longer because your wallet might not have paid a big enough fee to get in the next block. That makes bitcoin harder to use.

Using bitcoin is still better than the banks but its lead is decreasing. When you are a cryptocurrency innovating slower than the legacy banking system you know you have a real problem.

How it got to this

The number of transactions bitcoin can process, in other words, how much it can scale, is determined by 3 things.

As bitcoin blocks started to fill in 2015 bitcoin core developers chose to only make improvements in transaction size. Starting with SegWit and still ongoing, these efforts have increased bitcoin’s real-world capacity from about 3 transactions per second (TPS) to about 5 TPS.

Bitcoin core developers decided not to increase the size or frequency of blocks. This resulted in blocks getting full and bitcoin becoming almost unusable. Transactions took hours to confirm and fees were around $50! Worse than banks and Western Union, let alone other cryptos!

This crashed the market and caused a lot less people to use crypto.

Bitcoin core developers also decided to work on complex 2nd layer scaling solutions like side chains and lightning networks. After more than 5 years of development, these have not improved the scalability or usability of bitcoin. They are unnecessarily complicated and too technically difficult for average users.

Having bitcoin developers focusing so much time and effort on SegWit and these failing 2nd layer scaling solutions has meant they have not done anything else that could improve bitcoin in other areas, like privacy, ease of use or smart contracts.

Other cryptos that have not gotten stuck on scaling have moved on to other improvements like Monero improving privacy, Dash improving ease of use and Ethereum improving smart contracts.

Bitcoiners do have plans and proposals for other improvements, like schnorr signatures, mast and compact block relay. Bitcoin has made small improvements but they have gotten nowhere with anything meaningful for regular users because they are stuck spinning its wheels trying to scale in the most difficult way possible, ignoring the easier ways to scale while other projects go past them!

Why doesn’t bitcoin scale the quick and easy way?

Other reasons are that it’s not technically clever and elegant. It does nothing for their ego and self-image as genius engineers.

A lot of bitcoin core supporters (mostly subconsciously) don’t want bitcoin to go mainstream because they want it to be their edgy rebellious tech project that they can sound cool talking about in IRC channels and developer meetups.

Most bitcoin core developers don’t care enough about non-technical users and ease of use. When I get frustrated waiting for a bitcoin transaction to confirm, bitcoin core supporters say things like “You should have set a higher fee”.

This is passing the problem off to the users, in this case expecting them to use advanced features that a lot of wallets don’t even have, while also ruling out the key use case of microtransactions. That is not how to make a successful product.

A lot of bitcoin core leadership and supporters say things like;

Bitcoin is not supposed to be the everything blockchain, its strengths are

It’s not for buying coffee or playing online games or buying drugs or for your grandmother to use or for moon lambo speculation, use other things to do all that.

The sad thing is bitcoin used to be the best tool for all of those things. All it had to do to keep the lead, conquer the world and make all our lives better, was to scale, which it could have easily done.

This has cost anyone with a large holding of bitcoin millions of dollars in purchasing power and it has set back the cause of non-government, censorship-resistant, sound money by several years.

The future of crypto and bitcoin

The future for crypto is incredibly bright, it will take over the world and have a transformative positive impact on society and the lives of billions of people all around the world.

Bitcoin will be able to scale due to general technology improvements like global 5G/fibre optic rollout and Moore’s law. Layer 2 solutions like lightning networks might even work eventually. However, blocks will probably get full again and bitcoin will probably crash the market again before that happens.

The next crypto market bull run will quickly see bitcoin reach capacity and become almost unusable again with $50 transaction fees and hours-long wait times. At the same time, most other major cryptos will remain quick, cheap and easy to use. At that point 1 of 2 things will happen

If number 2 does not happen at the next bull run, it will happen at some subsequent bull run after that, unless bitcoin has already fixed its scaling problem.

By the time bitcoin gets past scaling it will only be matching other top cryptos in that regard. Those other products will already be miles ahead of bitcoin in all other areas and use cases.

The toxic scaling debate left a lot of the wrong kinds of people in leadership positions in bitcoin. Bitcoin’s scaling problem is a failure of governance. Dash used its governance system with on-chain voting to propose and approve a block size increase in about a day before it was urgently needed (when it was needed it was implemented without a hitch).

Even when bitcoin gets past its scaling problem the government will not have improved. Since bitcoin leaders dropped the ball so badly on scaling, what reason do we have to think they will do a good job with other challenges?

Crypto overall is a strong buy, I mean that in terms of future increase in value and usefulness. I hope bitcoin turns around but based on the evidence, it’s a sell.