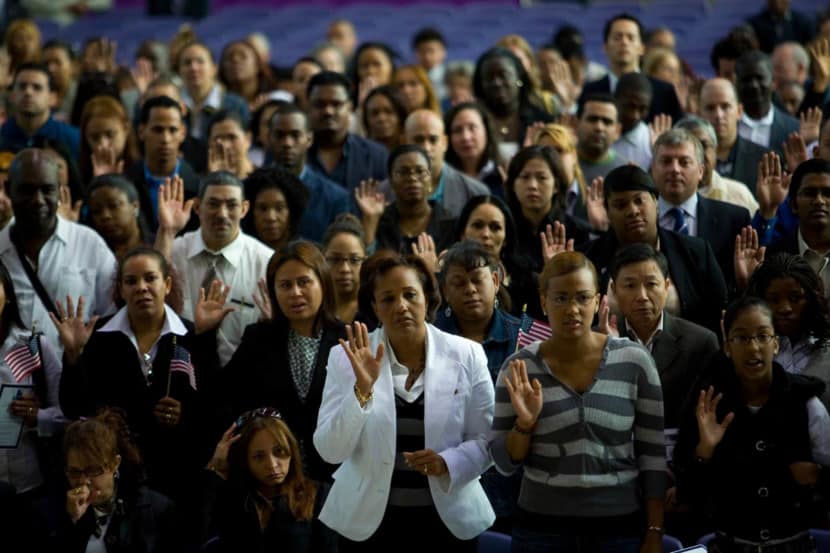 Immigration laws, borders and citizenship are ways for people to deny other people rights that they themselves enjoy based on birthplace. This is an irrelevant, unjust and counterproductive separation of people. This discrimination is holding back civilisation, prosperity and freedom for all.

It is just as unfair and absurd to reward or punish people for their birthplace as their skin color.

“Discrimination is treatment or consideration of, or making a distinction in favor of or against, a person or thing based on the group, class, or category to which that person or thing is perceived to belong to rather than on individual merit.”

So immigration systems that have different rules depending on citizenship and provide different rights to citizens and non-citizens are discriminatory.

It’s ridiculous that people in neighbouring countries see themselves as naturally separate, different and apart from each other.

Citizenship is like the caste system, but in law on a global scale. How would you feel about a society where you are segregated, not allowed to do certain jobs, live in certain areas or vote, based on cast? That is the society we all live in but instead of calling it casts we call it citizenship.

This is not a rich nation vs poor nation issue. We are all discriminated against by counties of which we are not citizens.

What are the motivations and outcomes of citizenship discrimination?

Non-citizens are discriminated against in order for citizens to protect advantages they exclusively enjoy, such as the lifestyle in their nation and government services provided to citizens. This is a greedy and selfish motivation.

These outcomes are detrimental to global society.

World GDP would roughly double if people and their property could move freely across boarders. That means we would all be on average twice as rich as we are now, if not for citizenship based immigration laws.

“No we are not discriminatory, some black people can get a 4 year probationary membership that can lead to full membership if they are married to or family of a member and make a $5000 non-refundable 30 page application or if their previous golf club persecuted them.

That would still be unacceptable discrimination. That is the situation with acquiring the rights of citizenship, except the automatic membership is based on birthplace instead of skin color.

This would make citizenship irrelevant, indeed the only way to achieve it is to end citizenship.

Having all laws apply to all people includes laws for entering and exiting nations, so ending citizenship will mean we can freely enter and leave every nation. As people are allowed to move freely goods and capital will follow and this will facilitate free and open commerce, trade, cooperation and innovation which will improve prosperity for all.

A properly qualified Filipina nurse could apply to work at an Australian hospital based on merit not birthplace which is as it should be. A Briton could paddle a raft down the Mekong River without having to beg for special permissions from 6 different corrupt governments. Ending citizenship will be a huge increase in freedom and equality for all people.

There will be large migrations from places like Africa and Latin America to places like Europe and North America. This will even out the quality of life disparities from place to place which will create a more fair society throughout the world and also negates most of the reasons for that migration to continue. In this way natural balance in quality of life will maintain itself globally.

Crypto has already realized this vision for money, in that any 2 people with crypto are equal no matter what their citizenship. The payment system has no way to discriminate on age, sex race or any basis. No government can interrupt a transaction based on citizenship of the parties.

Wider adoption of crypto is one step toward ending all discrimination. How important of a step is it? Well how important is money?