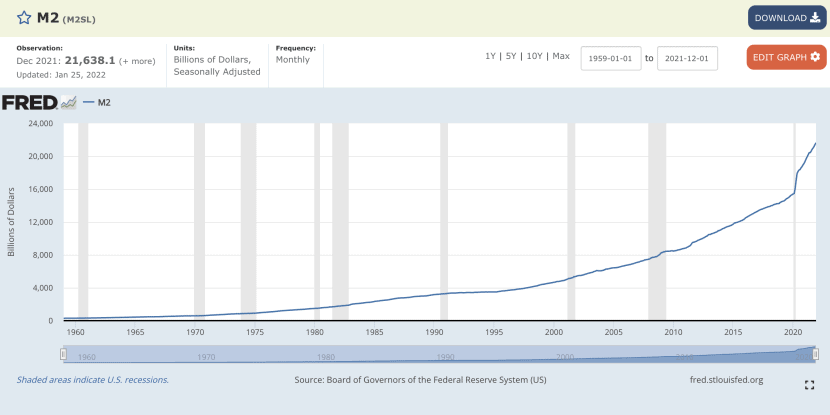 For readability I will use the term “dollars” to represent all government currencies; it could be pounds, euros, yen or whatever your nation’s currency is. These same dynamics detailed below are at play in most countries.

The US government is now adding a trillion dollars to its debt every 9 weeks. Even though they don’t have to pay most of the debt back now they do have to pay some of it back now and they do have to pay interest on it now, this is called servicing the debt. And they will have to pay it back later. How can they do that when they already spend more than they take in, which is called running a deficit? By borrowing more of course!

For most people or companies this would be an unsustainable debt cycle that would result in default and bankruptcy in a matter of years. However, the government has a trick that no one else can do which delays the crisis; they can create more money!

It’s a useful trick but it’s not perfect. The government borrows money into existence, meaning new money is new debt. As such the government can’t reduce total debt by creating more money, they can only switch debt that is due now for debt that is due later. This increases interest payments now and increases principal repayments later.

In this cycle the total debt and the cost of servicing it keeps growing and the government keeps doing the same thing until they have to create so much new money that it causes severe inflation and confidence is lost, resulting in financial crisis.

There is one thing the government could do to break the cycle. That is to spend less than they take in, which is called running a surplus, so they can use the surplus to pay down the debt. Unfortunately politicians’ incentives prevent this from happening.

Changing from a deficit to a surplus would require politicians to take more from people and give them less benefits, also known as austerity. This would be so unpopular they would be voted out of power and the next government would go back to deficit spending in order to stay in power.

Politicians don’t have the courage, long term interest and willingness to lose power that is required to run a surplus and pay down the debt. So all that’s left for them to do is ramp up the debt cycle.

“previous governments got us into this and it only needs to keep working until we leave office.  Why should we lose popularity by implementing austerity? Even if we do the hard things now to run a surplus and pay down the debt, the next government will just go back to running a deficit and increasing the debt; and they will be more popular for it!”

New money that the government makes to service their debt is monetary inflation and causes price inflation. Because more dollars exist they are each worth less than they would be if there were fewer of them. The bigger the debt, the more money they have to create to service it, the more inflation. So as the cycle goes on, inflation gets worse and worse.

Moderate inflation is good for the government. Since they are a debtor it makes their debt worth less in real terms. The the debt is nominally the same number of dollars but each dollar is worth less than when the debt was created.

Since inflation raises prices and people’s nominal income it raises the amount of tax the government collects. The government also owns real assets that go up in price when there is inflation, that makes their balance sheet look better and those assets can be sold for more dollars.

So inflation allows the government to get more dollars in through taxation and asset sales while the amount of dollars required to servicing the debt remains the same.

When the amount of new money the government has to create to service its debt is a significant portion of all the money in the economy, that causes severe inflation which can lead to a loss of confidence, hyperinflation and financial crisis.

Hyperinflation causes financial crisis which screws everyone, the poor, the middle class, the rich and the government. This will happen, it’s just a question of when and how you will be positioned when it does happen.

This unsustainable debt cycle is now the standard model of just about every country that has its own currency, including the eurozone. Economies like The USA and the European Union can get away with it for much longer since there is a lot of demand for their currency from outside their economy. That will help delay severe inflation and financial crisis but it will not stop it. Other economies with less external demand for their government currencies will experience financial crisis sooner.

There is no way to stop the government from devaluing your nation’s currency, they are already on the cycle and the only way to get off it would be to switch from a deficit to a surplus. This would require courage that they lack, long term vision which they are not incentivised for, a willingness to lose the kickbacks they get from spending and a willingness to give up power by being voted out of office as a result of unpopular austerity policies.

Even if a government budgeted responsibly, the next government would probably reverse those policies so they could gain popularity and kickbacks by spending more.

What you can do about it

That will protect you against inflation, however if a financial crisis escalates to full on economic collapse then all bets are off. There may be debt resets or monetary resets, there may be government seizure of property. Crypto currency may not stand up as well as we hope.

The best thing you can do to prepare for such a crisis is to diversify your wealth, spread it over different asset classes in different jurisdictions. Also gain skills, education and experience so you can create value and rebuild your wealth incase you are left starting again from nothing after a full on economic collapse.