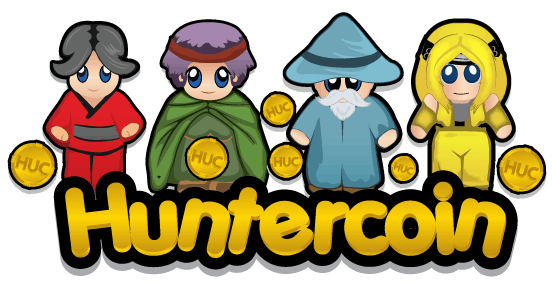 My first experiment with altcoins was buying litecoin, I felt nothing. I was proud to own bitcoin because I am an ideologue, but litecoin brought nothing new to the table. For my next trip to altcoin land I wanted something different, something that I would enjoy telling people about and that I thought could go up in value. Here was my criteria.

At my local bitcoin meetup a fellow true believer told me he was doing some testing for huntercoin. He explained it’s the first crypto currency that is human mineable as well as machine mineable. The proof of work is reward for human effort, not computing power. He also told me it was launched and being run by the namecoin developers.

Light bulbs were flashing above my head so I asked for more information. He told me the reward for human effort comes from a game you can play in the qt client. The game is pretty clunky at the moment but that will be improved on; basically it makes crypto more fun! I asked him about coin cap and pre-mine, he let me know its 42 million coin cap and there was no pre-mine.

This was all sounding very promising so when I got home I did some research and found huntercoin on Coinmarketcap for $0.68c a coin. I thought it was probably so low because it was only 5 weeks old. Huntercoin met all my criteria and I started to get excited. I entered the rabbit hole and found the relevant links.

Further notable features are that huntercoin is merge minable on both SHA-256 and scrypt algorithms. There is a new block every minute, producing 9 coins for the game and 1 coin for the miner.

Every move in the game or entry in the chat box is a transaction on the blockchain. The whole game state and protocol is stored on the blockchain rather than a game publishers centralized servers.

After getting positive reactions from some members of my personal crypto circle I made the plunge. I bought as many huntercoins as I could afford on Poloniex and I was a happy hunter.

Since then I have been disappointed as all the obvious opportunities for improvement the devs promised have not materialized, and there was a fork in the chain! Not caused by a 51% attack, just from huntercoin being a poorly executed project with code problems. The value dropped 90% and has since recovered slightly.

Why it’s more exciting than just a game

Bitcoin uses a decentralized, peer to peer proof based ledger (the blockchain) with a currency protocol to disintermediate central banks and commercial banks.

Central banks and ICANN operate in a monopoly and have political power and authority to push back against the new blockchain alternatives.

Huntercoin uses a blockchain with a game protocol to disintermediate massive multiplayer online game (MMOG) publishers, internet censors and content rating systems. Those publishers use centralized servers to keep the game state, then players connect to those servers to play. With huntercoin the game state is on the blockchain and players connect to that.

MMOG publishers are used to operating in a competitive environment and have no political power or authority to push back against huntercoin. This will make it easier for huntercoin to succeed than bitcoin or namecoin; because huntercoin is in a competition friendly environment.

Huntercoin has the competitive advantage that it can’t be restricted by sensors and content rating systems, like game publishers can be. 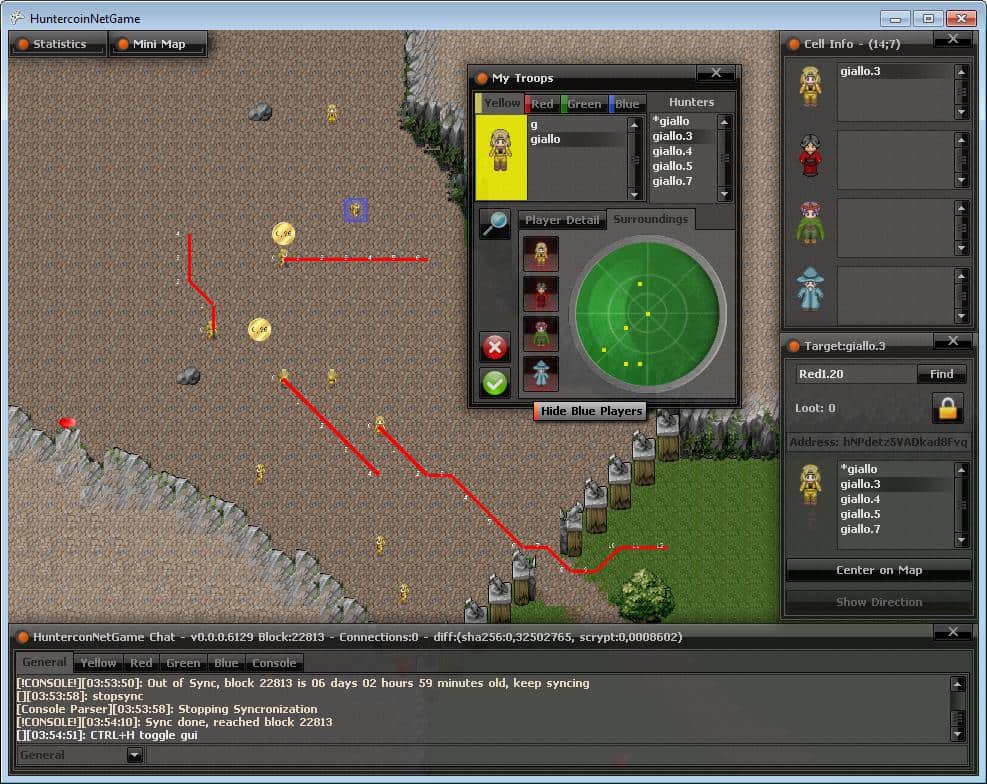 The qt wallet is very slow to synchronize. It hangs and uses a lot of CPU power during synchronization (don’t start playing the game until you have synced). The devs say technical solutions are being worked on and one day there may be no need to use the qt client, however hunters have been expecting this for months with little progress. The first alternative to the qt wallet is MithrilMan’s client.

The game is clunky and slow with little story. You buy into the game with 1 huntercoin (providing demand for the coin). This gives you a team of 3 players you can move around the world to collect huntercoins that are dropped into the game when new blocks are mined.

You can also explode one of your players which will kill adjacent opponents leaving whatever coins they had laying on the ground and available for your other team member to pick up if he can get there before anyone else.

You get a kick out of it because you are mining crypto currency by playing a game. However once the novelty value wears off you would rather play a better game, unless you need the money.

The game is very susceptible to bots who have taken over, effectively making it just another machine mined coin but with complications and performance issues introduced by making it human minable. The devs say they are working on solutions to give advantages to humans and readdress the balance. So far however that is all talk and no action.

The game is open source and can be improved upon in every update, particularly if more game developers join the project. With further technical innovations we might be able to get a great game. I think the best development would be a multi game environment where you can choose to mine coins by playing any one of multiple different games.

However I suspect that is more likely to happen on eathurum or a side chain and in the 6 weeks I held the coin no meaningful improvements were made despite devs saying their would be.

As of now you can only buy huntercoin at a couple of exchanges, Poloniex being the best one. We are still early but for now huntercoin is just another case of good idea, bad execution.

Disclaimer: I am not involved with the huntercoin project. I am just a crypto fan who owned some when I first posted this but have since sold and updated the post.