Before the last week of the 2018/19 NFL season I had a guaranteed 14,524 m฿ profit, no matter what the results of the games. This was from a combination of the Nitrogen (review) survivor pool and bets I made hedging against my survivor pool position in the last week. You can see my pick history on Nitrogen as player 189.

As I explain in the Nitrogen NFL survivor pool guide, I only have a small edge in survivor pools and there is no knowing how many years that edge will take to materialize. Given that, I was not going to enter any paid pools this year, until the events of week 1 allowed me to get a larger edge.

The pool had a 1000 m฿ entry fee. It was open for entries until the start of the last game of week 1. Just before entries closed I could see that 15 out of 20 entries made up to that point had already been eliminated! Their entry fees were in the prize pool, but they would not be in competition with my late entry.

However the 5 other entries had already survived week 1. My week 1 pick had to come from the last game. The favorite in that game had a 71% chance of winning, meaning my entry was worth

So a 1000 m฿ entry fee would give me 2485 m฿ equity, which is a 248.5% edge. I could not get that much edge because other players were seeing the same thing and entering late as well. All these late entries were taking part of the value that the losing entries had already lost.

In the end I made 7 out of 45 entries. So the prize pool was 45,000 m฿. 15 entries were already eliminated, giving the remaining 30 entries an average 1500 m฿ equity each. Late entries like mine had a 71% chance of surviving, so our equity was

1065 m฿ equity from a 1000 m฿ entry fee is a 6.5% edge. I add to that edge by being a better than average player and by having multiple entry strategies available.

I could only make these calculations after the 2nd last game of the week. That game was played immediately before the last game, when entries closed.

The 2nd last game was New York Jets @ Detroit. 10 out of 20 early entries had picked Detroit. This meant I would only enter if Detroit lost.

I was only able to get my deposit confirmed and my entries in on time because the game was a blow out. The Jets were leading 48 -17 in the 3rd quarter, I pulled the trigger just in time and made my entries with minutes to spare. 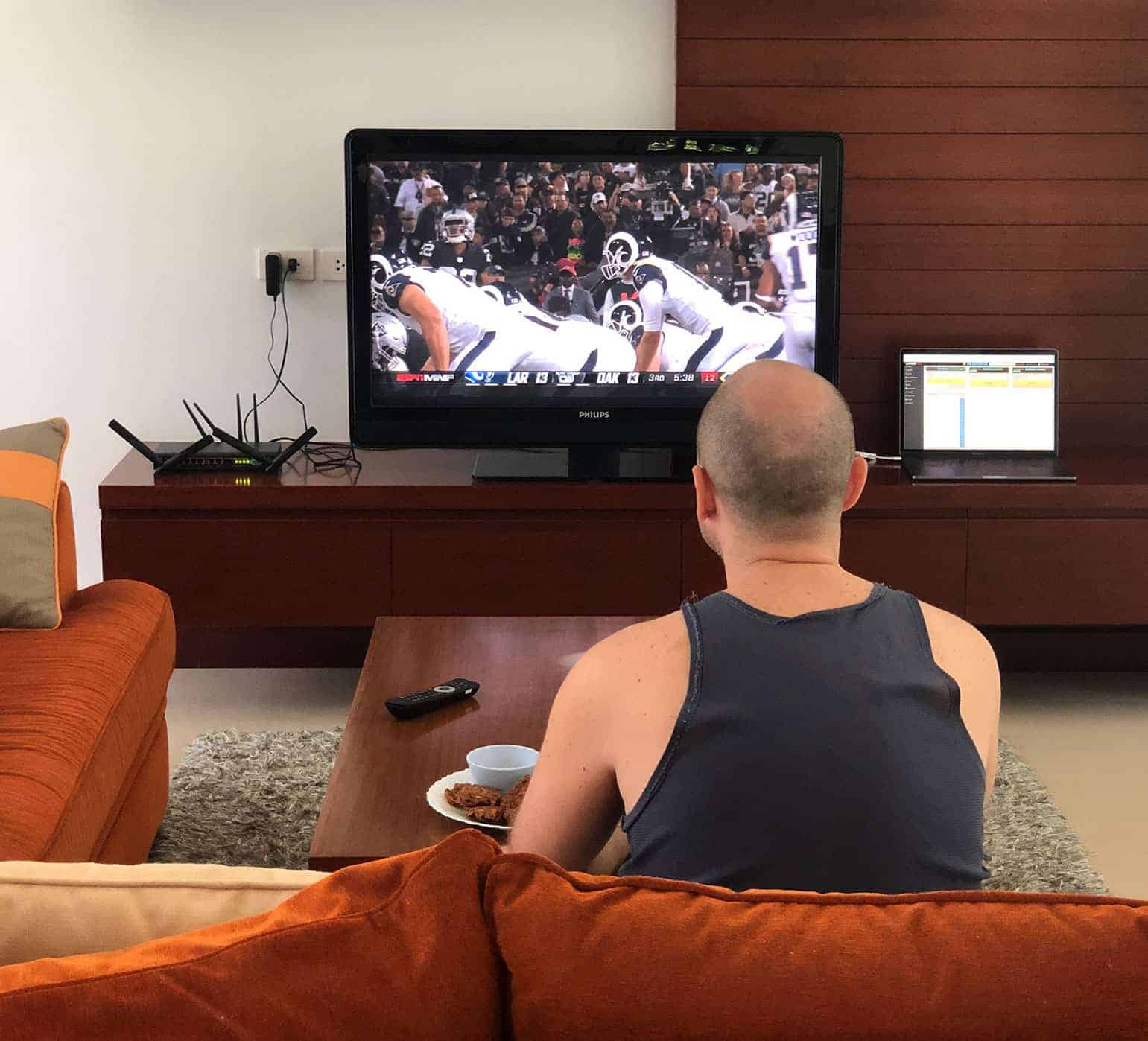 This was a brilliant sports betting experience. Every week I passionately supported different teams.

The first 3 weeks were a massacre, my opponents averaged only 54% survival rate while I averaged 70% survival rate. That meant by the start of week 4 there were only 4 entries left, 2 of mine and 2 opponents.

Weeks 4 to 16 were incredibly tense, edge of the seat affairs. Every week I fully expected to either lose 7000 m฿ or win 45,000 m฿ based on the outcome of a couple of games that could have gone either way. Many of these games were decided by incredible last minute drama.

It was the same last time I played Nitrogen’s NFL survivor pools. I knew nothing about about American football and the NFL, and I fell in love with them while winning 40,280 m฿.

It came down to the last 2 entries.

My best pick available, according to the odds, was the New York Giants (NYG) at home against Dallas. The odds indicated a 69% win chance. It was a game bettors should stay away from because it was a dead rubber and Dallas were expected to rest their best players.

My opponent had a better pick available to him; Houston (HOU) at home against Jacksonville with a 73% win chance.

Half the prize-pool minus my entry fees was 15,500 mB, but my total equity was only 14599 m฿. This was because I lost  equity to my opponent by having a worse pick.

I did not want to lose 7000 m฿, in fact I wanted to win the same no matter what happened. I laid off (bet against) my survivor pool pick, and backed my opponents pick.

I did not need any algebra to work out the amount to bet I just put the odds into a spreadsheet then plugged in different numbers until all outcomes balanced.

What if there was a tie

On the survivor pool a tie counts as a loss, but for the bets a tie is refunded. Since the current overtime rules have been in place there have been 1008 regular season games with 2 (0.2%) ending in a tie. Here is what ties would have meant.

What if my opponent did not pick Houston

I made the assumption that my opponent would pick Houston. He had been completely predictable all season, and Houston was the best and most obvious pick. I would have been been glad if he made any other pick, because he would have lost value to me.

It did introduce a very unlikely disaster scenario if all of these things happened.

In that case I would have lost about 8000 m฿ all up. I estimated the probability of that happening was ~0.03%.

How I made the bets

I got the bets on at Sportsbet (review, American bettors are geo-blocked.) because of the price boost feature that gives great odds on 1 bet per day. As always I loved the 0 confirmation betting, beautiful intuitive interface and instant bet grading.

My withdrawal was for over 45,000 m฿ and I got it in 6 minutes! Sportsbet were the hero of week 17; it’s a fantastic place to bet, specially if you if you want to bet live in play and even more so for high rollers.

My opponents pick won and my pick lost, meaning I lost the survivor pool and won all my bets. These were my results 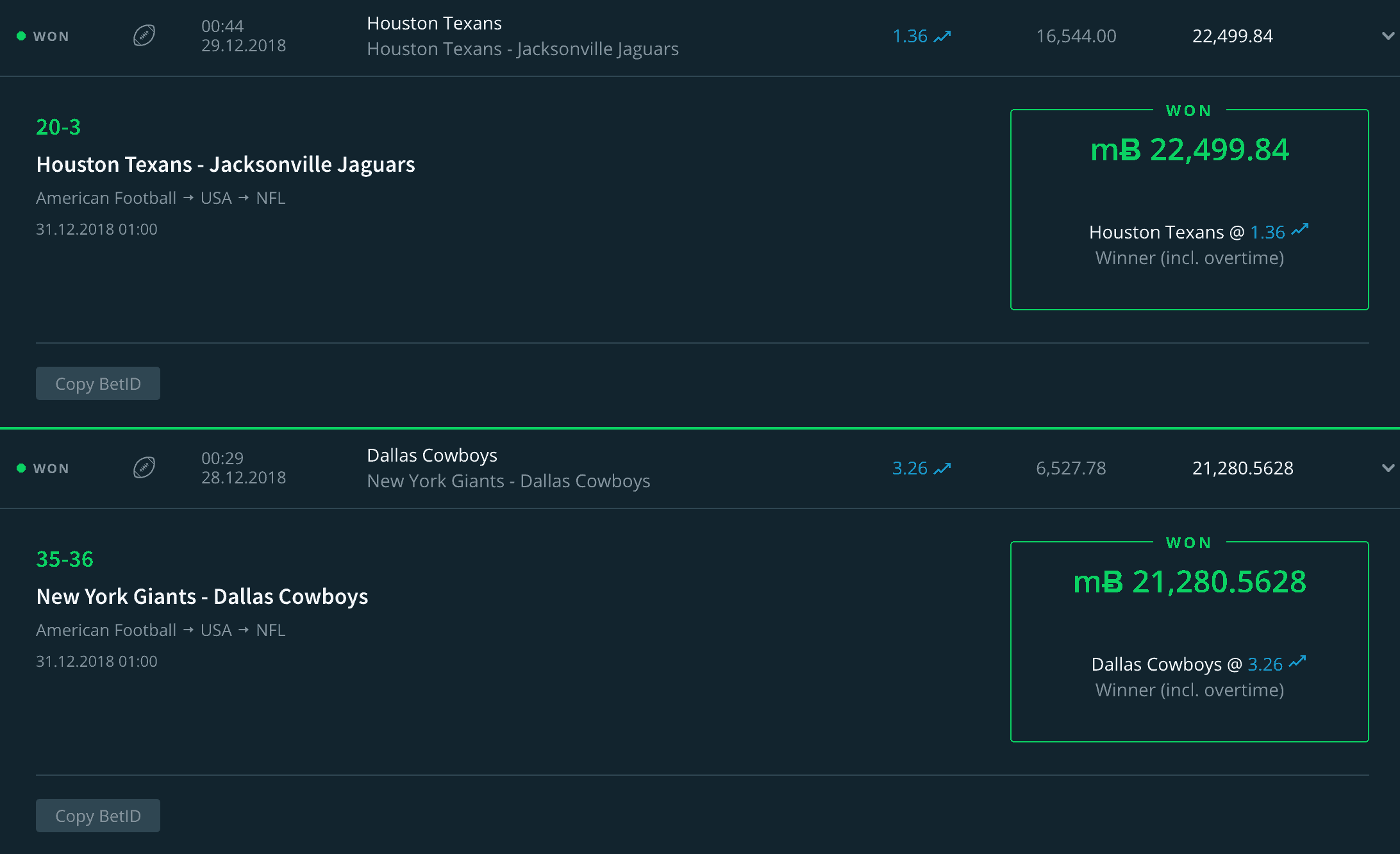 It was the right play to bet against my survivor pool position in the last week. If I just let the survivor pool play out without proactively betting, I would have lost 7000 m฿.

The average player in the survivor pool had 2.8 entries. The winner had 10, and that’s why he won. He did not bring any skill or have any luck. He just made the most obvious predictable picks every week.

Conclusion and what I learnt

I am thrilled with the result and the experience overall. I loved the whole process from figuring out the edges and probabilities, to watching and rooting for different teams every week, and now enjoying my winnings.

Nothing I did to win is beyond you. Nitrogen has 9 survivor pools with buy-ins from free, 1 m฿, 3 m฿, 10 m฿ et cetera. So give it a go next year and hopefully we can both win!