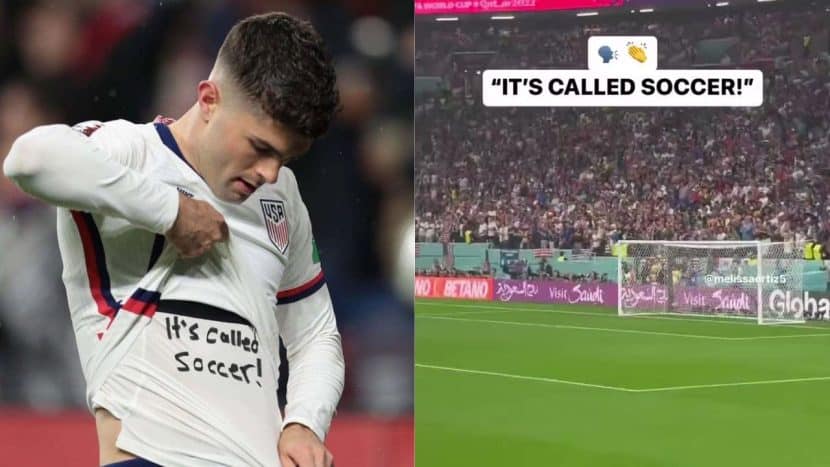 Seeing “It’s called soccer” On Christian Pulisic’s shirt during a goal celebration (which I later found out was fake) was a light bulb moment for me. I immediately agreed with the sentiment and was on board with the movement, both linguistically and culturally.

The USA has a vibrant and unique sporting landscape which American soccer should both embrace and extend. Yes they should take the best things from European soccer, like promotion and relegation, however they should not feel inferior or apologize for their unique take on the sport.

Of course you don’t have to tell Americans that, they never feel inferior or apologize for being themselves, but other countries like Australia do.

America will not be successful at soccer by trying to become France or Brazil, they will never be as good at being France as the French are and they will never be as good at being Brazil as the Brazilians are. The only way the USA will be successful at soccer is by doing it the American way, which they can do better than anyone. This means figuring out what the American way is, improving that over time, and getting really good at doing it that way. That is in fact how France became France and how Brazil became Brazil.

Sounds reasonable right? Well it’s just as true for Australia, Mexico, New Zealand and every country. It just took a display of American self-confidence to crystallize the sentiment into a 3 word catch phrase “It’s called soccer”.

There have long been discussions in Football Australia about whether we should copy the Dutch system; the answer is no. We should define and refine the Australia system, continually improve it and maximize our performances within it. Dutch soccer’s culture and system will not work in Australia because we are not like the Dutch, and thats okay. We have our own strengths which the Dutch are famously lacking, like

We need to optimize for those while improving our weaknesses, which happen to be Hollands strengths, like

This is what Graig Foster has been on about for years, and the good news is that it’s working!

When I grew up in migrant rich and ethnically diverse Melbourne the main thing I heard about Australian soccer is that it was no good, Australia is crap at soccer. In my neighborhood this was usually in comparison to Creek or Turkish soccer.

How Australia can win a World Cup

So now, how are we going to win a World Cup? We need to do it the Australian way and the Australian way of soccer will largely be defined and refined in the Australian domestic competitions. We need better domestic leagues which means we need promotion and relegation in the A-league. That is the single change that will make the most difference in taking Australian soccer to the next level.

Another big driver would be to host a World Cup. This would greatly increase local awareness, investment and participation in soccer and cause a major improvement at the national level. We should start bidding to host World Cups, possibly joint bidding with Indonesia.

Yes we can call it Soccer

If anything, soccer is the better term because it’s unambiguous. In the English language soccer is one code of football while

are other codes of football. But if you want to call soccer “football”, thats fine. Aussies and Americans will not tell you to call it soccer, which is a piece of common sense that should be reciprocated by those doing the opposite.