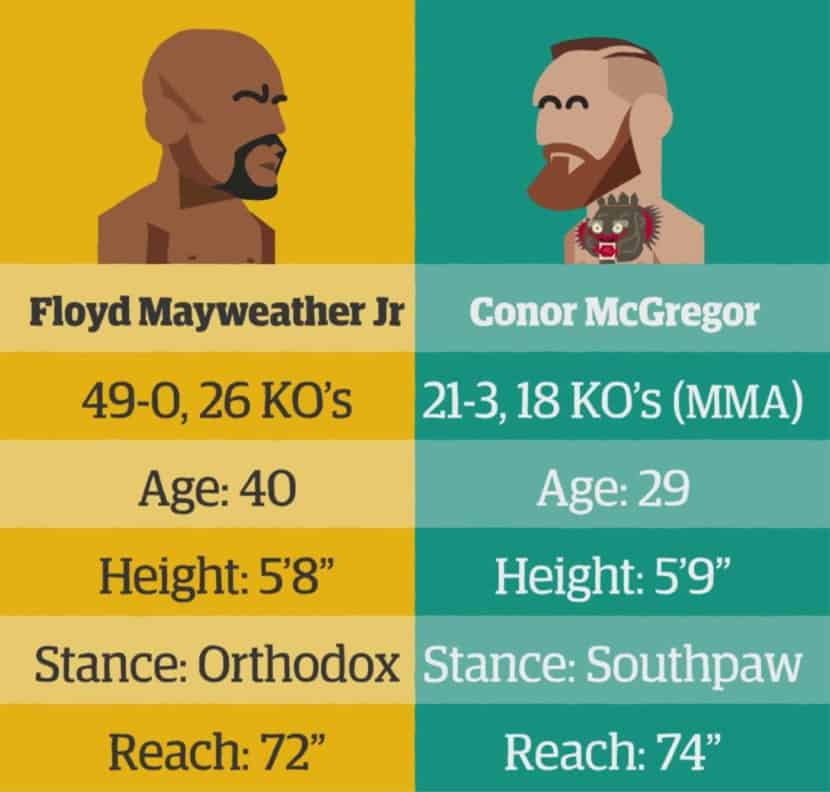 See the boxing crypto betting guide for an overview of boxing bet types and strategies.

Put all your money on Floyd Mayweather

This event is an almost guaranteed chance to win free and easy money. Of course I want Conor to win. I dislike Floyd “woman beater” Mayweather as much as the next guy but he is easily going to beat anyone who has never boxed professionally.

Consider all the reasons McGregor supporters say Conor has a chance to win, like

If all those factors play out to Conor’s maximum possible advantage, it could mean, at most, he lasts past the 3rd round.

Fighting Floyd Mayweather is a dose of cold reality.

We are talking about a boxing match between someone who has never boxed, against one of the greatest boxers of all time. Yet media pundits are saying “But he comes at different angles and has a 2 inch reach advantage…”.

That is like saying tennis great Roger Federer could win a badminton match against a top badminton player because Federer is taller and will hit the shuttlecock in a way that the badminton player has never faced before. Yes Conor will box differently than Floyd’s previous opponents, he will box worse!

Floyd Mayweather is not invincible

One of these days Floyd is going to be so old he loses to a less acclaimed fighter, simply due to his age. Mohamed Ali started losing when he was 36 and Floyd is already 40. However Ali lost to good boxers, not shit talkers with 0 professional boxing matches.

Floyd has always taken excellent care of his physical condition. His defense is so good that he has taken less damage than other fighters with his amount of experience. One day he will be too old but he is not too old for this fight.

The only way Floyd loses is if:

Because boxing is an individual sport with no teammates or backups, these things could actually happen. They could happen to Conor but that would not change anything because he was going to lose anyway.

I estimate there is less than 10% chance of something like that happening to Mayweather and causing him to lose the fight. So as long as Floyd’s odds are over 1.1, that is a value bet.

If you want to bet on McGregor

The fun bet for Conor fans is to bet that the fight will go over 9.5 rounds. McGregor lasting that long would be an upset and an amazing achievement. He would rightly be considered the moral victor and the people’s hero.

*Max bet is on the Floyd Mayweather to win selection.
** Sportsbet and Nitrogen show the max stake for 1 bet but you can make the same max bet multiple times.

If you are just looking to make a bet on this fight then use the information in the above sportsbook comparison and odds comparison tables to pick a sportsbook.

If you want to join a sportsbook for more than just this fight there are a lot of things to consider when choosing. We cover them all in our detailed crypto sportsbook reviews. The short version is that the best crypto sportsbooks are BC Game (review), Nitrobetting (review) and Mayweather vs McGregor crypto betting guide (review).