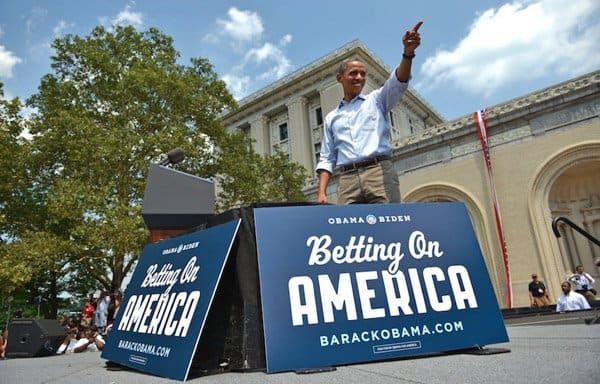 During the renaissance Roman bookmakers took bets on who would be the next Pope, until Gregory XIV banned the practice under penalty of excommunication.

This century sportsbooks used political betting as a fun PR tool. Offering odds on an election or referendum was a way for sportsbooks to get mentioned in news pieces by journalists who wanted to pad their election content with a fun paragraph about the betting markets.

In the last UK general election candidates quoted odds on their own campaign materials and past US presidential campaigns have tried to influence the odds to help shape public perception of their candidate’s chances!

During the 2012 US presidential elections hundreds of websites reported the figures from Intrade prediction market. Intrade correctly gave Barack Obama a bigger probability of winning than polls did.

Intrade was a small pool of liquidity making it easy to manipulate, so the Mitt Romney campaign placed bets on Romney to improve his odds in order to make it look like he was gaining momentum after a successful debate.

Why is political betting so popular

Political bettors can study the landscape, crunch the numbers, come to an informed prediction that they can argue about with their peers and hopefully gain the satisfaction of being proven right. Alternatively bettors can go with their emotion and back their own favorite candidate in order to make rooting for him/her more exciting.

This can also be said about sports betting but political betting gives people who are not interested in sports, like many intellectuals and political junkies, something to bet on.

Unlike casino and sports betting, political betting allows you to influence the outcome of the event you are betting on! By voting, donating, campaigning or even by betting so much you affect the odds and therefore the public perception of the state of the race. In fact political betting may be the only motivation many people have to vote at all!

Political betting markets provide a very accurate predictor of the eventual outcome of an election, much more so than opinion polls. Political betting markets concern themselves with the eventual final outcome whereas opinion polls only provide a snapshot of the state of the race at the moment the poll is taken which is not at the moment of voting.

There are many technicalities of how opinion polls should be carried out which are not always followed. Human error and bias can also skew the results.

Prediction markets react to new information much faster than polls can. When it was reported that 2012 Republican senate candidate for Missouri, Todd Aikin, had said the “victims of legitimate rape seldom become pregnant” his betting odds instantly took a hit, a week later opinion polls caught up.

In the case of John Mccain and Mitt Romney’s Vice Presidential running mates the betting markets reflected the selections before the announcements were made. This suggests insider trading which makes the markets predictive power even better.

One now famous political bet happened when it was assumed John McCain would announce his running mate at an event in Dayton, Ohio. A punter studied private charter flights and saw one from Anchorage Alaska that fit the bill. He accordingly bet on outsider Sarah Pailin and won big.

Odds makers and the wisdom of the crowed are much better at predicting the results of elections than they are at sporting events, because luck is less of a factor. However betting on the favorite is not always easy money as surprises, such as gaffs or scandals, can happen between when you make your bet and election day.

Moral hazard and challenge to democracy

Political betting can create monetary incentives to attempt to effect the outcome of an election, unrelated to policies or issues.

Political betting can make people vote and campaign purely to advantage their own bet. Such voters will then be happy or unhappy with the result of the election based on their betting profit or loss, rather than civics.

A lot of the things that make crypto suited to match fixing in sports also apply to political betting. An Election Commission employee in a battleground state or a campaign staffer could make a large anonymous bet against a candidate and then secretly take actions to undermine that candidate.

A newspaper editor with proof of a scandal that would greatly harm a candidate’s chances can anonymously bet against that candidate then release the scandal in the most harmful way possible. Or maybe it’s worth creating the scandal out of nothing for the betting profit.

What’s next and the role of crypto

Nothing effective can be done about the above situations, they are a result of human nature, however megalomaniac politicians will try. There will soon be rules mandating that no one working on a campaign or employed by a political party or a government election body will be allowed to make political bets. There will be proactive investigations looking for such activity.

These rules will pair with existing ‘know your customer’ rules that force licensed sportsbooks and prediction markets to collect the identity of their customers and report any large or suspicious political bets to the authorities.

Offshore jurisdiction and crypto will be key ways around these restrictions and there will be political betting scandals involving crypto. The incentive exists and the opportunity exists.

Political betting will continue to increase in popularity to the point where it is as much a part of political coverage as it is of sports coverage.

This should not be a surprise as politics has been reduced to a popularity contest theatre sport with 3 word slogans, $1000 haircuts and zingers. It’s essentially the non-violent version of WWE Wrestlemania and people would bet on that except professional wrestling is fake and rigged, not like polit… oh wait.

A sportsbooks point of view

I discuss this topic in depth with Sportsbet’s Director of Sportsbook and Head of Trading to get a sportsbook’s perspective. Please give it a watch.