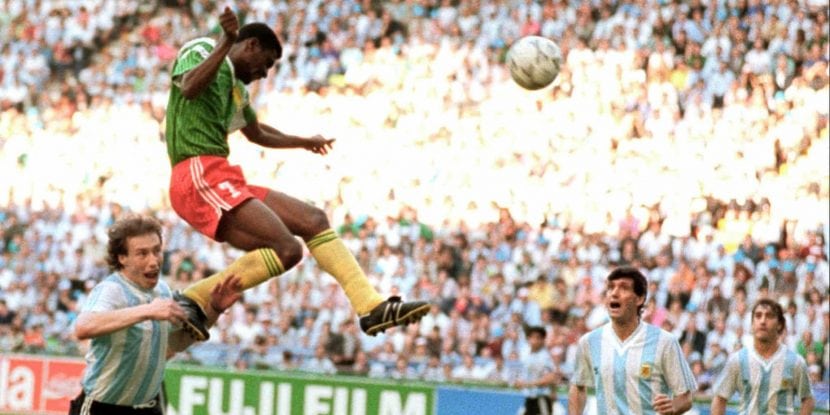 The FIFA World Cup is renowned for showcasing the very best and worst in soccer. There have been huge controversies and upsets along the way. In anticipation of the upcoming 2022 World Cup we look at some of the top World Cup upsets which had a dramatic impact on bettors.

In the opening match of the 1990 edition the defending champions Argentina faced Cameroon. Diego Maradona’s team were the favorites to win both the match and the tournament. Cameroon were quoted at 500-1 to win the tournament and were considered to be amateurs.

The African team’s overwhelming physicality and unity proved too much for the Argentinians who had expected a lackluster performance from their opponents. Cameroon took the lead in the 67th minute despite being a man down. Cameroon frantically defended their lead against a stunned Argentina and sustained another red card.

Argentina were too stunned to recover with Cameroon winning 1-0 in what would be one of the greatest giant-killings in the tournament’s history. Cameroon carried the momentum from the big win and became the first African nation to reach the quarterfinals.

1994 was the first time that a unified Germany took part in the World Cup since 1938, and they were favored to win it all, given West Germany alone won the previous edition. However before that, they’d have to contend with Bulgaria in the quarterfinals. Bulgaria won 2 of their 3 group games to qualify for the second round, where they advanced with a penalty shoot-out win over Mexico.

The Germans gained the lead just after halftime from the penalty spot. Bulgaria answered by scoring back-to-back goals in the 75th and 78th minute.

Odds of 8.63. The tournament opener saw an overconfident French squad facing a Senegal side playing in its first-ever World Cup. France had won both the 1998 World Cup and the Euro 2000 and were looking to continue their dominance in world soccer. However, Senegal went on to defeat France 1-0.

Senegal’s goal was set up by the African soccer player of the year, El Hadji Diouf who mercilessly attacked the flanks of the French. France may have salvaged a win were it not for several shots that hit the woodwork.

Seol Ki-Hyeon scored a dramatic last gasp equalizer in normal time to cancel out Christian Vieri’s opener. South Korea then scored a golden goal 3 minutes before the game would have gone to penalties with Gianluigi Buffon in his prime between the sticks for Italy.

The controversy surrounding this match was a result of South Korea’s unpunished fouls and several refereeing errors against Italy. There was a wrongly disallowed goal by Damiani Tommasi and a red card against Francesco Totti for supposedly diving even though he was fouled. In the end FIFA got the result they wanted for the home team.

Odds of 4.34. The quarterfinal between South Korea and Spain was the second controversial match that featured questionable referee decisions in favor of the co-hosts. Normal time ended with both of Spain’s perfectly good goals disallowed and offside flags hindering Spain’s progress time and again.

During extra-time Spain scored what should have been a golden goal but it was disallowed as the linesman declared that the ball had crossed the dead ball line when it clearly was still in play.

The match went to a penalty shootout and South Korea managed to score from all 5 shots, while Spain missed 2.

Odds of 4.4. France’s very public and embarrassing meltdown marred all of their group matches with a draw and 2 losses that sent them packing.

Several prominent players such as Patrick Vieira, Samir Nasri, and Karim Benzema were foolishly omitted from the World Cup squad which led to tensions running high. Before the first match, Florent Malouda had a training ground altercation with the coach and was benched for the match against Uruguay which they drew.

Nicolas Anelka was sent home after France’s 2-0 loss against Mexico (odds of 3.88) due to the half-time tirade he unleashed on the coach. The next day the team revolted by boycotting their training day. Their captain Patrice Evra got into a heated argument with a trainer that led to him being dropped for the match against South Africa, which Les Bleus lost (odds of 3.48).

Odds of 6.91. A struggling Italian side came into this group stage match with draws against both Paraguay and New Zealand. They only needed another draw to qualify for the round of 16. But a lack of attacking fervor and imagination, coupled with defensive woes left Azzurri wanting.

Marcello Lippi’s side showed glimpses of their true champion quality but it was too little too late and they may have salvaged a draw were it not for the manager fielding Fabio Quagliarell too late in the match.

odds of 13.53. Spain were the World Cup favorites having won all 10 of their qualifiers. However their opening game was marred by an embarrassing loss to Switzerland. Spain dominated possession but the shock defeat came after a defensive stalemate that saw a number of promising chances on goal unrealized.

The Swiss found the back of the net in the 52nd and hit the post in the 75th minute. It was the wakeup call the Spaniards needed as they eventually went on to take the title.

Odds of 7.42. Defending champions Germany faced Mexico in the opening match of their group. Die Mannschaft experienced all of Mexico’s aggression and speed right from the start. El Tri exploited their opponents’ old and slow midfield who were unable to contain Mexico’s rapid counter-attacks.

Lozano scored in the 35th minute and the Mexicans defended magnificently in the second half to retain their lead and constantly adapted by using a fluid formation to keep Germany guessing. Even though Germany had 25 efforts on goal they just couldn’t find their way through the Mexican defenses.

Regular time finished 1-1 and Russia continued to stifle Spain’s overwhelming dominance of possession resulting in a goalless extra-time. Russia then went on to beat Spain in the penalty shootout 4-3. Goalkeeper Igor Akinfeev saved 2 penalties in a shootout as the hosts knocked out Spain to reach the quarter-finals for the first time in 48 years.