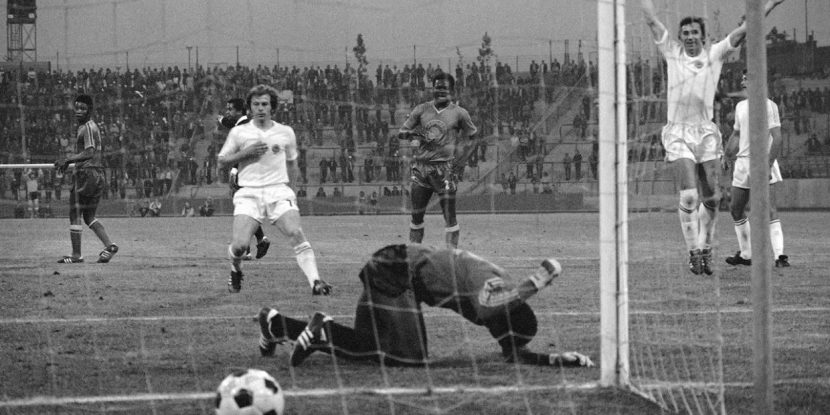 In the 2018 World Cup, the biggest winning margin was England 6-1 Panama. Which game at the World Cup do you think will have the biggest margin? If you get that right will win at big odds by betting on the “any other score” selection in the correct score market.

1974 – The African Cup of Nations winners, Zaire (Democratic Republic of Congo) were the first and only African team to play at the 1974 World Cup. They competed in the tournament amid a backdrop of financial ruin which nearly resulted in mutiny. Fortunately, officials stepped in and paid the players to take to the field. It could be argued that Zaire threw the game in protest, as they lost the match 9-0 to Yugoslavia. After 3 goals were scored in the first 20 minutes, the coach replaced the goalkeeper, Kazadi Muamba with the second-choice 5’4″ Dimbi Tubilandu who conceded another 6 goals.

1954 – This particular tournament used a unique format that saw the 16 qualifying teams divided into 4 groups of 4 teams each. Each group contained 2 seeded teams which only played against the 2 unseeded teams. South Korea was pitted against Hungary who trounced the Asian team 9-0. Hungary progressed to the final where they were beaten 3-2 by West Germany.

1982 – El Salvador qualified for the tournament despite civil war tearing the country apart at the time. In their first match, El Salvador were on the receiving end of the biggest ever World Cup winning margin when Hungary beat them 10-1. Hungary’s Laszlo Kiss scored 3 goals in 7 minutes and became the only substitute to score a hat trick. El Salvador lost all 3 of their group stage matches, while Hungary didn’t make it past the group stage.

1938 – This tournament only featured 15 teams (Austria withdrew) and a straight knockout format. If a match was tied after 90 minutes, then 30 minutes of extra time were played. If the score was still tied after extra time, the match would be replayed. Cuba beat Romania in their replay while Sweden had a walkover due to Austria’s annexation by Nazi Germany. The lopsided quarter-final match resulted in Sweden thrashing Cuba 8-0.

1950 – Bolivia’s group only consisted of 3 teams while the other groups had 4. However, France withdrew before the tournament started which meant Group 4 would only have 1 match. Uruguay’s outstanding squad with legends such as Juan Alberto Schiaffino (2) and Oscar Miguez (3) demolished Bolivia 8-0. They progressed into the next round before eventually beating the hosts, Brazil in the final showdown to claim the trophy.

2002 – Die Mannschaft started their campaign by thrashing Saudi Arabia 8-0 during which Miroslav Klose (the current top World Cup top goalscorer) scored a hat trick. Despite several controversies during the tournament co-hosted by South Korea and Japan, Germany’s modest team went on to play in the final only to lose 0-2 against Brazil.

1974 – This was the first out of 3 World Cups to feature 2 rounds of group stages. Poland had a great run all the way to the third-place playoff where they beat Brazil 1-0. But before that, they also beat Argentina and Italy and humiliated Haiti with a thorough drubbing thanks to goals from legends Grzegorz Lato (2), Kazimierz Deyna, Andrzej Szarmach (3), as well as Jerzy Gorgon.

1954 – This was the first time Scotland participated in the tournament, where they lost their first match 1-0 to Austria. Their second match saw them facing and losing against the defending champions, Uruguay. Only 3 of Uruguay’s players scored, with Carlos Borges (3), Oscar Míguez (2), and Julio Abbadie (2) leading their team to a 7-0 victory. Uruguay progressed to the semi-finals where they lost 4-2 after extra time to Hungary.

1954 – This tournament produced some of the biggest wins in World Cup history with this particular match being only one of a handful to end with a 6-goal-plus margin. It was South Korea’s first World Cup appearance and they were certainly the whipping boys. Turkey smashed South Korea 7-0 with Burhan Sargun’s scoring a hat trick. Turkey eventually fell to Germany 7-2.

2010 – Portugal drew against the Ivory Coast in their first match of Group G, but came back with a vengeance when they thumped the lowly North Korean team 7-0. Ronaldo only managed to score 1 goal in this match marking his first international goal in 16 months – and what bizarre goal it was. Portugal only scored in this match and then did not score again for the rest of the tournament. They were finally knocked out by Spain in the round of 16.