Quoted in the image below is supposedly Gandhi’s description of a winning strategy for nonviolent activism. Although there is no record of Gandhi saying it this has often played out when new paradigms, political movements or technologies disrupt existing powers. It has also been true of crypto. 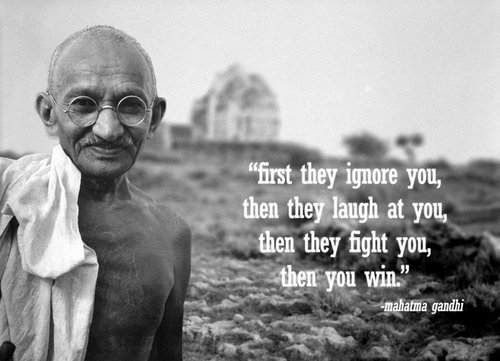 “First they ignore you”


“Then they laugh at you”

In 2012 and 2013 people laughed at crypto, such as this mainstream media example,

Then they fight you

This began in 2014 but will soon get worse. Consider who is fighting crypto, why and how they are doing it.  You can’t help but worry about the damage they can inflict, and you can’t help but think that we have a tumultuous few years ahead.

Who is fighting crypto?

Those threatened by the rise of crypto who have the motivation and the means to fight it include;

That includes most of the banking system, most branches of government, the military industrial complex and most of the world’s largest corporations.

Why are they fighting crypto?

Government’s power comes from controlling the monetary system. In particular the supply of new money; how much is created and who gets it. Governments also control what can and cannot be used as money in which types of transactions.

Governments guarantee demand for their currency by mandating that taxes can only be paid in that currency. This guaranteed demand is the only thing that ensures government currencies have value.

Currency collapses make it impossible for the government to pay for things or repay debts that are denominated in other currencies. This has happened recently in Venezuela, Zimbabwe and Argentina. It has happened hundreds of times throughout history and it will happen to every government currency in use today, the only question is when.

Banks depend on being able to create new money, debt and credit. Other businesses such as Western Union and Visa depend on charging fees for things that crypto does for free. If people prefer crypto to government currency for some transactions both of these business models will be less profitable.

How are they fighting crypto?

Crypto’s potential enemies are orders of magnitude more powerful and well resourced than the entire crypto ecosystem. In crypto’s favor is the fact that no one has the power to change the laws of mathematics and that there is no central point at which to attack crypto. No one can break crypto itself however there are many other things they can do.

Manipulation through the media

Crypto’s enemies are using the media to manipulate public opinion against crypto. This can be seen in the slew of groundless media releases attempting to connect crypto to ISIS or suggest that crypto is to blame for underage drug overdoses.

These are just the beginning, we can expect hyperbolic reports of crypto being used to fund child pornography, rig elections or anything else that can be used to smear crypto’s name. These reports will then be used to justify restrictive anti-crypto laws.

Lobbyists and shill politicians are enforcing anti-crypto laws such as a bans in Bangladesh, Bolivia, Ecuador, Iceland, India, Kyrgyzstan and Vietnam, double taxation in Australia and the restrictive bit-licence in New York. There are already too many cases to mention and these are just the beginning, the laws and their enforcement will only get more draconian as the existing power structure gets more threatened.

You can see this in action on the bitcoin sub-reddits /r/bitcoin and /r/btc.

Competing on features and services

The legacy financial system is slow, inefficient and expensive because it has not had to compete against anything better until now. Before crypto each country’s monetary system was a monopoly with little incentive to improve.

Now that the banks are forced to compete with non-banks they will greatly improve their services. For example banks can find a way to perform account to account transfers within an hour 24/7. They have not bothered to do that so far because there has been no faster option for consumers to use.

On the surface it’s clear crypto’s more powerful and better funded enemies should win. However if you understand the advantages of decentralized, math based blockchains and the inherent problems of unlimited debt based money you can see crypto is at an advantage.

For the “and then you win” part to have more meaning we should define what winning is. I believe crypto has already succeeded. Crypto has

Winning is for crypto to continue working and keep doing what it has been doing. We can ensure victory by educating our peers, building and promoting crypto services and putting as much of our net worth in crypto as possible.

Some would say the ultimate success for crypto would be the downfall of the legacy monetary system. However it’s more likely that crypto will exist alongside government currencies and the debt based financial system.

There does not have to be one winner and one loser for crypto to have a profound influence and disrupt the current financial system in a positive way by giving people a choice. When you have a choice of currencies the money you choose can be a form of expression. How much does the choice matter? Well how much does money matter?