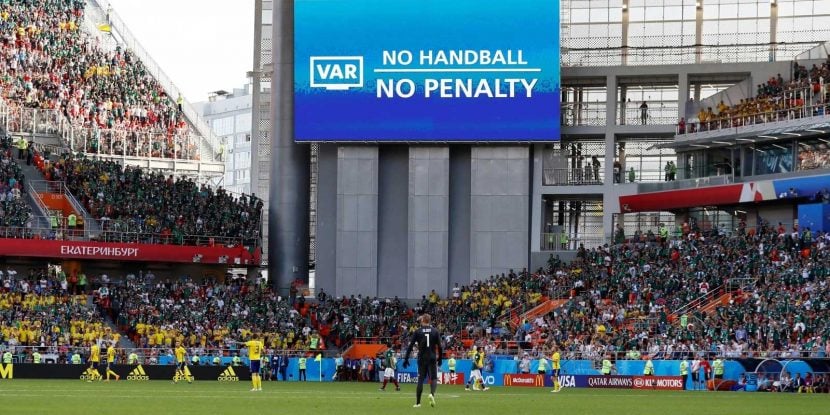 The introduction of a video assistant referee (VAR) in the 2018 World Cup was not without controversy or strife, but since then the VAR system has been refined. Several rule amendments have been put into place to prevent the issues of 2018 creeping into the upcoming World Cup. The VAR system has been implemented in over 100 competitions globally with consistent protocol throughout.

Naturally, controversies are still present in the beautiful game. VAR isn’t meant to remove debate over refereeing decisions – its purpose is to give the officials the best possible information before making a decision that can decide a match. Generally, it should ensure that there are no dramatic miscarriages of justice at the next World Cup matches.

A video assistant referee (VAR) is a match official, with independent access to match footage, who may assist the referee only in the event of a ‘clear and obvious error’ or ‘serious missed incident’ in relation to:

Together with the VAR is an Assistant Video Assistant Referee (AVAR) and a Replay Operator (RO), who assist in making decisions. The team operates remotely from a specialized VAR hub, and are able to contact the referee through his earpiece.

There’s been a perception that VAR takes away more goals than it actually does, but statistically thats been proven not to be the case. The mindset is perpetuated due to the new VAR offside rules that require a linesman to keep his flag down and let the attack play out if he is not sure whether it’s offside or not.

If the ball ends up in the net, then they will do a VAR check to decide whether the player was in actual fact offside. Previously the linesmen’s flag would have gone up and play stopped in many of those cases. Now it feels that VAR is denying more goals than it actually is, however, the number of goals has risen compared to matches before VAR.

VAR reviews often lead to more penalty opportunities and also lead to encroachment calls on goalkeepers who come of the goal line early and save a penalty. Which ultimately leads to more goals, not fewer.

In the 2018 World Cup, 169 goals were scored across the 64 matches, which is historically high

Ironically VAR was introduced to reduce controversy but the rule to let players go through to score a goal when there’s a possible offside results in more controversy.

There were 29 penalty kicks called at the World Cup 2018, 16 more than at the previous tournament in Brazil. VAR helped officials make a conclusive ruling on 11 of those penalties.

In league matches accidental handball has been a point of contention which led the International Football Association Board (IFAB) to update its classification with the supposition that VAR would adjudicate successfully.

Pros and cons of betting with VAR

For all the snail-paced decisions and farcical moments, it’s accepted that soccer bettors still want to see VAR succeed in promoting fairness that has the potential to benefit bettors:

VAR has more subtle impacts on bets other than just changing the result of one specific outcome such as the final score:

Betting on a World Cup match with VAR

The days are gone when you would see a goal fly in and instantly know how that affected your bets, now you have to wait minutes for a decision to be made. In many instances VAR will rule on something that is not very consequential either way.

The best way to deal with VAR reviews is to wait until play resumes before you adjust your live betting position. An early cash-out can be affected while placing another wager could be voided should the initial decision be overturned by the VAR decision.

It’s advisable to watch the match live so that you can follow the state of play and gain insight into the VAR decisions at hand.

VAR at the World Cup

Officials have put new VAR technology to the test at the Arab Cup 2021 and the 2022 Club World Cup in Abu Dhabi with the system instantly detecting offsides. The system also features automated line-drawing and virtual reality replays that could be used at the World Cup.

Officials hope the new technology which currently tracks 18 points on a player’s body and captures the ball will replace the controversial VAR offside lines. The technology that will track up to 29 points in the future is set to replicate the almost instantaneous precision of goal-line technology which should cut decision-making time to around 3 seconds.

Furthermore, VAR will provide match officials with an instant message to their watch when a player is in an offside position.