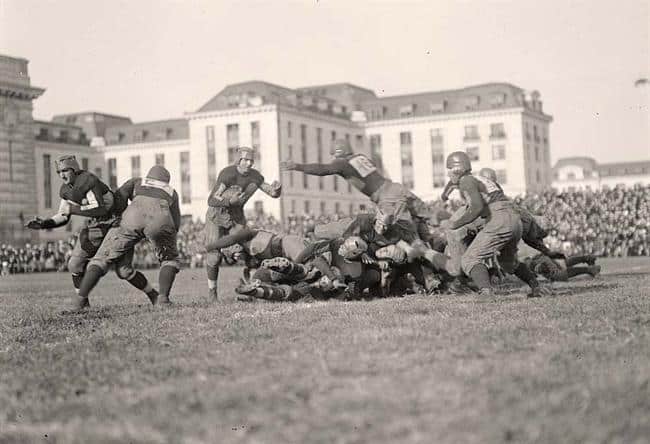 US pro sports has no soul

MLB, the NBA and the NFL are leagues with franchises instead of clubs. Franchises that are privately owned for profit. That move cities when they can make more money somewhere else. Where players come and go between franchises mid-season and there are no incentives for playing local athletes.

As a result these are franchises without souls or loyalty who exist only to make money for the owner. They lack roots in their local community and do little for society as a whole. Because of this some of their own local fans do not feel as passionate about them.

Enter college sports. The local college/university has been in the city for generations and it’s not going to move interstate. It’s not privately owned and run for profit, its run to help the community and society as a whole.

The college/university is tied into the local community in many ways, everyone in the city either went there or knows people who went there and so it represents them and their community and actually cares about them. Also many of the players are locally grown.

All of this makes many fans more passionate about their collage team than their pro team.

The rest of the world does not need the college alternative because our pro sports do not lack the community roots, representation and soul that US pro sports lack. In the rare case that they do lack it, local fans can turn to quality 2nd division or state league teams to provide it. Which brings us to our next point.

US pro sports has no 2nd division

Another reason the US needs college sports is that US pro sports don’t have good 2nd division or state leagues.

In Australia and Europe these leagues give athletes out of high school a level to grow, learn, and mature in, before they are ready for the pro leagues. In the US this role is filled by college sports.

They also provide authenticity in the rare case when that is lacking in pro sports outside the US. For example English soccer fans care more about their local Championship (2nd division of English soccer) team than they do about the Premier League.

If you wonder why US pro sports don’t have good 2nd division and state leagues we go into that and offer solutions to the problems with US pro sports in the empty soul of US sports and how to fix it.

The amateur nature and 170 years of tradition of college sports has given rise to charming idiosyncrasies like unique and endearing game day traditions, stadiums and mascots.

Here are some examples of the collage sports oddities. these have no place in the US pro sports world of business efficiency, slick marketing departments and stadiums made for corporate boxes.

Boise State University football team play on smurf turf. The field is colored entirely blue with orange, and so are the player’s uniforms. There could be any number of players on the field at any time!

Clemson University players touch a rock on a pedestal for good luck as they run onto the field. It used to be the coaches doorstop. He did not die making it a special memento or anything, he just started talking about his doorstop and getting players to touch it…

If Ohio State University players beat University of Michigan in the 120 year old rivalry the players are awarded a small trinket of gold pants inscribed with their initials and the score. This is because in 1934 someone asked the Ohio coach how his team would fare against the hot favorites Michigan; he answered

“They put their pants on one leg at a time just like everybody else”.

Ohio State went on to a famous underdog victory.

The game day experience of attending college sports is superior to the pro equivalent. Games are held on college campuses, which tend to be nice places with the stadium surrounded by open parks and gardens rather than a concrete car park.

There is a tradition of tailgate parties before and after the game. This is a combined picnic, barbeque and beer garden for both teams’ fans to enjoy.

A more raucous experience can be had around Louisiana State University in Baton Rouge. A colony lasting more than 24 hours springs up featuring Cajun and calypso food, conga lines and other festivities.

All this and the tickets are generally cheaper than the pro sports games.

College athletes are admired in a different way because they have not yet been corrupted by money. They don’t showboat as much and are more humble. Ordinary people relate to them more as hard working strugglers trying to make it, rather than the spoilt millionaires of the pro leagues.

The amateur nature of the players makes the sports less predictable. Smaller body’s mean speed is more often a factor than strength. Also the defenses are not as well drilled which makes for high scoring and free flowing games.

The inevitable player turnover means it’s about the team not any individual. The team has a historic identity and sporting philosophy that will endure regardless of an individual star player who can only last a few years.

Loyalty with the fans is multidirectional and generational. Further evidence of the greater loyalty in college sports is that coaches and key non-playing personnel stay in their jobs longer than in pro sports.

College sports has been around for longer than the pro leagues so there are older and deeper rivalries. Rivalries are also more localized due to many colleges being in smaller cities that don’t have pro sports franchises.

Baseball is the exception for a reason

Further evidence of my point is that most of the the differences in favor of college sports over pro sports apply less to MLB than they do to the NBA and the NFL. In MLB

So it has followed that baseball is the least popular of the major sports at the college level. College baseball is not as necessary because pro baseball still supplies a lot of what is good about sports that is missing in the NBA and NFL.

The best place to bet on college sports are Nitrogen (review) and Why college sports is only popular in the USA (review). They cover all the NCAA games and have more live in-play betting than anyone. To see who has the best odds check the odds comparisons.

Have fun betting and GO LUMBERJACKS!