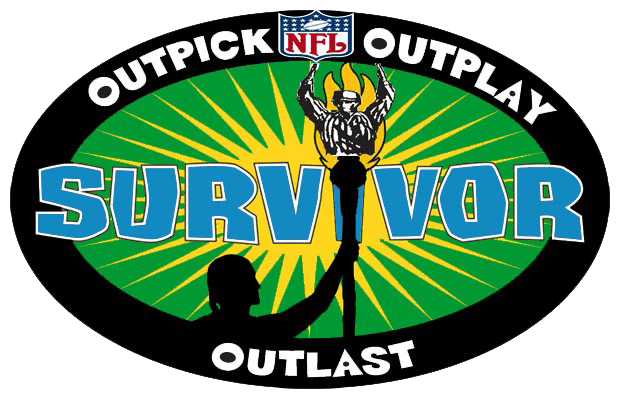 The full details, the number of entrants and the guaranteed prizes in each pool can be seen here.

Playing in survivor pools is awesome! Every week you have games to watch with different teams to support. It’s particularly fantastic if you are not an NFL fan yet, enter a survivor pool and watch the games and you will be!

The survivor pool format gives you passionate interest in a new team every week. Add the magic of sports with its drama, suspense, controversy, interwoven storylines and you get the greatest entertainment in the world!

Nitrogen’s Survivor pool starts with a 0% edge. You can turn this into a slight edge in your favor by

Even with that small edge the variance is huge, most of the time this edge would not be realized because

You can have more than one entry per pool (except in the free pools) so you can run multiple strategies simultaneously.

This strategy is problematic in all but the smallest pools for 2 main reasons;

However if there are only 2 or 3 players in a left in a pool it makes a lot of sense because;

Pick based on chance to win and value to hold

I run a strategy with multiple entries in single pools and picks based on a combination of how likely a team is to win and how valuable a team is to keep available for future weeks.

The oddsmakers know more about NFL and the matchups than I do, so the odds for each game tell me all I need to know about how likely a team is to win that week. The odds for the super bowl winner and each teams projected wins for the season tell me about how valuable a team is to keep available for future weeks.

Often I identify a handful of favorites that are around the same odds and pick the one that is least valuable to hang on to as a pick for later. This pick has the same chance of winning that week as the better teams and I lose less equity by losing this team as an available pick in the future.

For the first half of the season I judge how valuable a team is to keep available for future weeks based on the odds for that team to win the super bowl and that teams projected wins total. Later in the season I consider each team’s performance in the season so far and their opponents for the remaining games.

Zig while others zag

This is particularly important if you are a single entry in a larger pool. Your best shot to win is to let most of the other entrants make the obvious picks while you pick a team most others don’t. Then hope the obvious pick loses, which happens multiple times every season!

I won 40,280 m฿ across the 5 pools I entered! A huge success that you or I could replicate next season.

Due to time constraints I did not participate this year 🙁

I bombed out in every one! hahaha, I can’t even say there were too manny other players, my pics just did not work out at all.