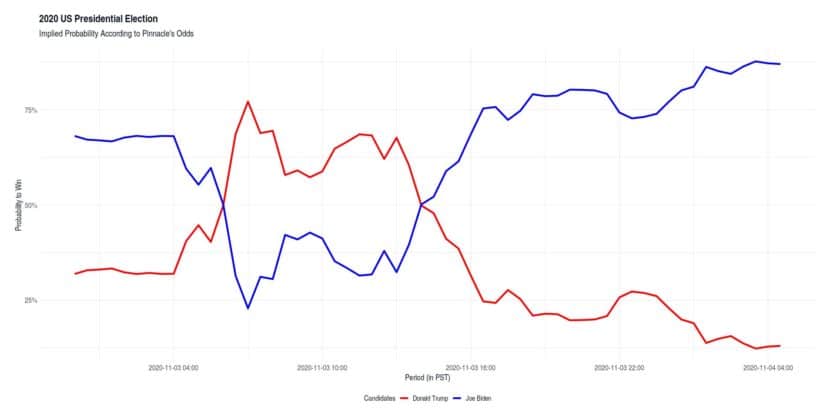 Staying on the sidelines until election day

A year before the 2020 US presidential election I thought whoever the Democratic nominee was would beat Donald Trump. I would have bet on it if they had not selected one of the worst possible candidates in Joe Biden.

I held off betting because I thought Biden might make a fatal error and that anti-Biden arguments might gain traction.

Also things were too chaotic for me to feel confident betting. Trump’s economy was booming then Trump mishandled coronavirus and then there was widespread rioting! Months out there was no guessing what the situation on election day might be.

Pulling the trigger on election day

Anti-Trump enthusiasm and no Biden disasters

By election morning Biden had avoided stepping on major landmines and had stayed strong in the polls.

On the other hand it still seemed like there was an enthusiasm gap in Trump’s favor. However as election day went on I saw that in person turnout, which would favor Trump, was modest compared to early/mail voting numbers which would favor Biden. This indicated that early voting anti-Trumpers were at least as numerous and enthusiastic as election day voting Trump supporters.

By 7PM eastern time I also saw voting itself had gone smoothly with no election day controversies. When bettors I respect suggested this was another rare Mayweather vs McGregor scenario I was ready to pull the trigger and make a big bet.

Biden’s odds were around 1.4, then when the first newsworthy results broke they shot up to 1.6. Returns showed Trump was on track to win Florida. However I could see this was mostly due to Cuban Americans in and around Miami which is an isolated phenomenon.

I figured the election would be decided by national trends perhaps among suburban women or seniors or black voters. Cuban Americans around Miami could deliver Florida’s 29 electoral college votes to Trump but no more than that.

The big odds change was not only due to Trump winning Florida’s but mostly because it showed the polls had got it wrong again like they did in 2016 and that Trump had gained momentum late in the campaign.

I still liked Biden nationally and took the better odds as my cue to start betting.

Getting the bets down

Stake had the best odds on Biden and I should have bet more there. I ended up mostly on Sportsbet because they credit deposits instantly with 0 confirmation betting. So I knew if I deposited most of my bankroll there I would not miss the price waiting for confirmations. I mismanaged my balances due to not having planned carefully enough and that resulted in me getting lower odds than I should have.

Right after making the bets I had to take my daughter to playgroup. I got back around midnight ET and to my horror I saw that Biden was the underdog! Florida, Ohio, Indiana and Iowa had all been called for Trump and Trump had big leads in Georgia, Michigan, North Carolina, Pennsylvania and Wisconsin.

Biden’s odds shot up to 2.9 and my Twitter feed was saying this election was a repeat of 2016. For hours I watched nervously as liberal TV pundits congratulated Trump on a great campaign, talked about the need to reform the Democratic Party and asked how the polls got it so wrong again.

The only remote hope was that Biden would come back in any 2 of Michigan, Pennsylvania or Wisconsin, where Trump had big leads but a blue wave of urban districts and early/mail votes had not yet been counted.

That got more and more plausible and then became probable around 5:00 AM ET when Biden pulled ahead in Wisconsin and it seemed the same thing was about to play out in Michigan and other states making Biden the favorite again.

Needless to say this had not been another Mayweather vs McGregor scenario. You can see the rest of my big crypto gambling wins and losses here.

Pinnacle Sports says this was the biggest betting event in history! It was certainly the biggest in my betting career. Read more about the rise of political betting – consequences and the roll of crypto.

A sportsbooks point of view

I asked Sportsbet’s Director of Sportsbook and Head of Trading if the 2020 US presidential election was their biggest event ever as part of this in depth discussion on political betting, please give it a watch.