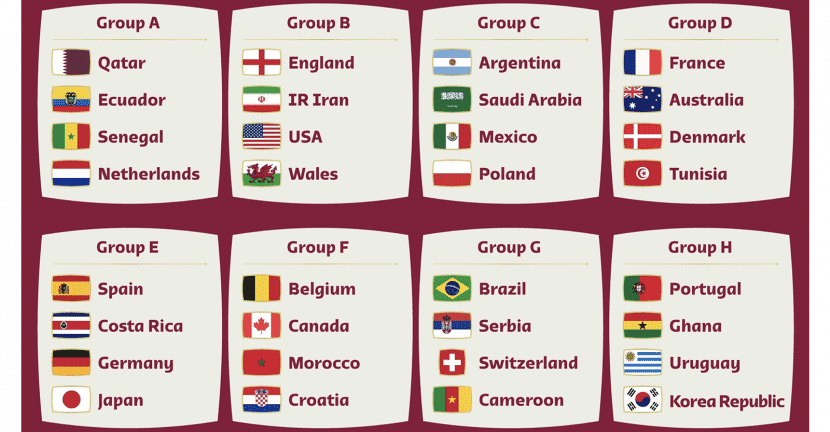 Betting on teams to win, or to qualify from, their group in the FIFA World Cup is exciting and profitable. For a single bet you get to go on a 6 match, 2 week long, rollercoaster ride.

There are usually high odds on all but 1 team in each group. Anything can happen in a one-off game, so betting on individual games is high variance. Groups feature 3 games per team for a total of 6 games giving ample opportunity for the better teams to realize their superiority.

“To win group” vs “to qualify from group”

The differences between these bet types comes from the fact that 2 teams qualify from every group while only 1 team wins.

Betting on a team to win a group gets 4 to 7 times higher odds than betting on them to qualify! To win is less forgiving, one bad match can sink the bet. There are many more ways to qualify, even if a team loses a game, and draws a game, they can still scrape though with 1 win out of 3.

Teams get 3 points for a win and 1 point for a draw. 4 points is usually enough to qualify. To win a group normally takes 6 or more points.

What happened at the last World Cup

In 2022 there are 3 types of groups amongst the 8 groups. You can identify their makeups by their distinct odds patterns.

These groups have 1 good team, 1 okay team and 2 bad teams. The strategy is to bet on the okay team. The following groups are weak, with the okay team in bold:

These groups have 1 good team, 2 okay teams and 1 bad team. The good team’s odds are very short so the strategy is to bet on one or both of the okay teams. The following groups are balanced, with the okay teams in bold:

Group E has 2 good teams, 1 okay team and 1 bad team (Spain, Germany, Japan and Costa Rica). If you think Spain or Germany will underperform then the strategy is to bet on the other favorite to win at around even money and bet Japan to qualify at 4.00. If not then just give it a miss since Group E is the only strong group.

You want to back teams who play the easiest of their 3 group games first or last. The best case scenario is to win your first game and having the easiest game first helps with that. However, group standings come down to the last game, and in that game you know what result you need, so if the last game is the easiest it helps a lot.

One strategy is to identify an overpriced favorite. Perhaps they rely too much on a single player (Portugal) or the public is only in love with them because they won last time (France). Then in a weak group bet on the 2nd favorite, or in a balanced group bet on one or both of the 2nd and 3rd favorites.

But that applies even more to the sportsbooks setting odds on the favorite. Any upset can result in the group favorite failing to win, or failing to qualify from, their group. That is why there is value on the underdogs. And betting on underdogs is fun!

Best strategy: Bet on the 2nd favorite in weak groups

Denmark has improved in leaps and bounds and their first and last games in the group are against bad teams. So they will qualify, that’s free money. Can they snag a draw against France and have a chance to win the group? Yes they absolutely they can.

France have to break the World Cup winner’s curse; reigning World Cup champions usually under perform; 4 of the last 5 have failed to make it out of their group!

Australia are lucky to be here: they have no strikers, a tactically inept local manager and a substandard domestic league.

African World Cup qualification is so random that you just don’t know if Tunisia is much good for qualifying through it or not. African qualifiers only played 10 matches – about half as many as other confederations. We can see that their squad is very weak on paper.

If you disagree with Denmark to win then bet on France. Or you can bet on both France and Denmark to win and make a 1.75% profit if either of them top the group.

Croatia play bad teams in both of their first 2 matches and will probably already be qualified on 4 or 6 points. If Croatia get at least a draw against Belgium they have a fair chance of winning this group.

Meanwhile Belgium are getting old. Morocco are unpredictable. Canada has come through the weakest qualifying path. North America is given more qualification spots than they deserve to insure that the USA always qualifies and boosts everyone’s bank accounts.

If you disagree with Croatia to win then Belgium is a must bet for multiple units. You can make both bets for a profit of 3%, so long as the unthinkable does not happen.

Masters of the dark arts Uruguay have come through the fire of the hardest qualification route in the world. They will out-skill the Ghanians and out-strength the South Koreans.

Portugal have proven themselves to be a resilient team, but that resilience often comes in the form of holding on for a draw, which is good for Uruguay’s chances in these group bets.

If you disagree with Uruguay to win this group then bet your house on Portugal. Betting on both Portugal and Uruguay nets a 3.21% profit if either of them win! Not a bad return for 2 weeks.

Denmark, Croatia and Uruguay to win their groups

There are three ways this strategy can win.

One way to think about this is that the 2nd favorite has a good chance of getting 6 points from the 2 games against bad teams, and any time a team gets 6 points from 2 games they will probably win the group. Yes the favorite has an even better chance but their odds are a hell of a lot lower, and hey, favorites lose all the time!

To follow this strategy in the 3 weak groups gives us 3 bets at average odds of 3.5, so you only need to win 1 bet to make a profit! Here are the possible outcomes of betting 1 unit on each selection.

Denmark, Croatia and Uruguay to qualify

There is an opportunity for profit by betting on the okay team to qualify in each group that has 2 bad teams. If they beat both bad teams as expected, then they are through. Even if one of the bad teams upsets them, these 2nd favorites are good enough to make up for it in the other 2 games. After all, to win the bet they only need to scrape though with 4 points.

With average odds of 1.55 we need 2 out of 3 bets to win in order to be in profit. Here are the possible outcomes of betting 1 unit on each selection.

These bets would make a great multi at combined odds of 3.7!

Strategy: Bet on the 2nd or 3rd favorite in balanced groups

Group A – Bet on Ecuador

The Netherlands often fail to get their egotistical stars to gel together as a team and frequently underperform at Word Cups. In recent times the Eredivisie has not been as highly regarded as it used to be.

Senegal are unpredictable, sometimes impressing but often not.

Ecuador will thrash Qatar in their opening game giving them 3 points and a healthy goal difference to start off with, and needing only a draw from either of the next two games to qualify.

If the group winner or qualification is decided by goal difference, it will come down to who had the biggest winning margin against Qatar. That could just as easily be any of the other 3 teams but Ecuador get the highest odds so are worth a punt.

Group B – Bet on the USA

The USA are the fittest team in football which will help in the heat. And they have the easiest opponent in their last game. Although who knows how Iran will play against their biggest off-field enemy, they might rise to the occasion, or buckle under the intense pressure.

Iran get better results than the level of talent in their squad would indicate. They are a team who can play worse than the opponent and still grind out a draw or even score late for an upset.

Wales rely too much on a single player. Gareth Bale could do anything from win the group single-handed to completely flop.

There is a lot going on in this group and the potential for chaos is exactly what can make betting on underdogs to win profitable. Although it’s also possible the chaos will happen amongst the bottom 3 teams with England floating above it.

This is a case where it’s hard to see the superior team that is Argentina, doing worse than the inferior teams of Poland and Mexico. But that is the point of betting on underdogs to win, things that are hard to imagine do happen at every World Cup.

Mexico has the easiest match last and consistently makes it to the World Cup knockout stages. Poland don’t. In fact at the last World Cup they were one of only 2 teams that failed to get out of their group having been favored to qualify. And they did not even make it to the 2 World Cups before that.

However Poland, have qualified through a strong federation (which is more than Mexico can say), they are improving over time and appear ready to take the next step.

From this far out it feels like Serbia’s and Switzerland’s chances of qualifying are closer than the odds suggest. Cameroon could spring a surprise on either of them and if that happens to be against the Swiss in the opening game, then Serbia will be heavy favorites to take 2nd place in the group.

Serbia and Switzerland could easily finish equal on points, which suggests value in the higher than even money odds on Serbia to qualify.

The average odds of all the 2nd and 3rd favorites to win these groups is 6.17. So pick the 5 best value and you only need 1 to win to make a decent profit. My picks are in bold in the tables above.

It’s tempting to bet on less than 5 teams, after all there are only 4 balanced groups to choose from. But remember this strategy is based on the fact that unpredictable things happen, which is the only way that this strategy wins. Unpredictable things like that one bet you don’t want to make actually winning. So given the odds, 5 bets is the magic number.

Here are the possible outcomes of betting 1 unit on each selection.

2nd or 3rd favorite to qualify from balanced groups

My picks in this strategy have average odds of 2.04, meaning I need 2 out of 4 bets to win to make a profit. Here are the possible outcomes of betting 1 unit on each selection.

Good luck with your betting and have fun with your crypto!