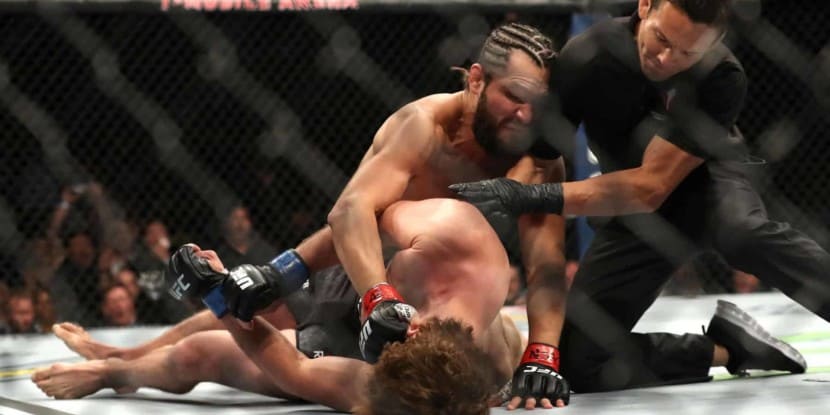 Hold onto your seats! Here’s our selection of UFCs 8 most memorable and dramatic knockouts…

The fastest ever KO in the UFC here, as Gamebred takes out Ben Askren with an incredible flying knee. Following months of preparation and anticipation, the fight was stopped after just 5 seconds!

Arguably Conor McGregor’s finest moment in the octagon, this fast and ferocious stoppage is all the more impressive given that rival Jose Aldo actually clocks McGregor with a similar punch at the exact same moment he connects the other way. It could’ve been a double KO! But instead the Irishman’s chin stood up to the test, and he became UFC Featherweight champ.

The Spider Anderson Silva announced himself in style in his UFC debut, with a commanding and dominant stoppage of Chris Leben. It takes us back to 2006; the oldest entry on our list. But one for the ages!

This wasn’t meant to happen! Kickboxing expert Holly Holm shocked the UFC world with this gigantic upset against the 1.10 favourite and unbeaten superstar Ronda Rousey at UFC 193. One of the most dramatic victories in UFC history and it took place in front of what was at the time the largest ever crowd – 56,000 at Melbourne’s Docklands Stadium.

This one has it all… the surprise element, the fact Cody Garbrandt was on the back foot, and then the almost poetic timing of the knockout connection coinciding with the bell.

All the way back to in 2009 for UFC 100 here. Dan Henderson was in trouble in this fight until a moment of magic put The Count to sleep. “Right on the button!” says Joe Rogan in commentary.

The late Ryan Jimmo here, with one of the most explosive UFC debuts in history. The Canadian was in no mood to wait around, catching Anthony Perosh clean and collecting UFC 149’s Knockout of the Night prize in the process.

Edson Barbosa became a UFC fans favourite for an array of spectacular kicking skills, but this moment is what he’s best known for. It is the cleanest, slickest, most technically proficient spinning heel kick you could see. Poor Terry Etim simply did not see it coming.

That concludes our most memorable 8, but which epic KOs are we missing?

Did we overlook your favourite? Let us know in the comments below…