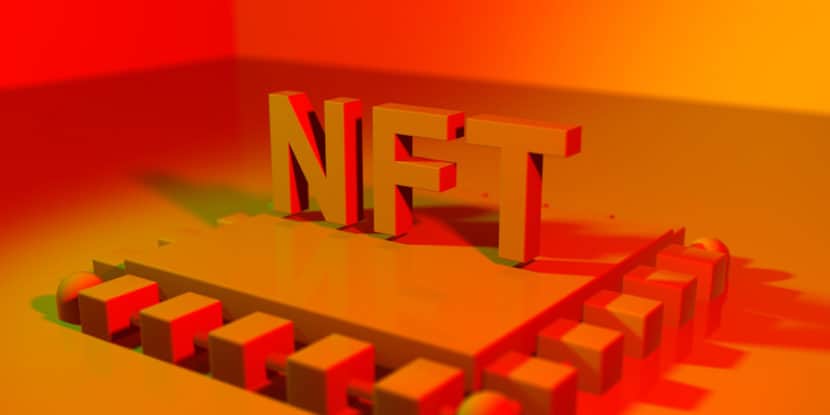 Given the wild fanfare surrounding Non-Fungible Tokens (NFTs) it’s hardly surprising that the market has already captured in excess of $12 billion in sales. As the market continues to mature and more celebrities, influencers, and athletes join the hype, it leaves one asking a lot of questions.

What is an NFT?

The short answer is an NFT is a digital token tied to assets that can be bought, sold, and traded.

Now you’ve surely come across an explanation that draws a comparison between bitcoin and NFTs. It usually goes a little something like this:

An NFT is a kind of token, much like bitcoin is a token. However, the main difference between them is that the bitcoin token is fungible while the NFT is non-fungible:

A good real-world example of a fungible item is a US dollar. If I exchange my $1 bill for your $1 bill, nothing really changes. While they are two different bills, both represent the same value.

Conversely, a non-fungible item could refer to a rare playing card, you can trade it but you won’t get something that’s exactly the same or has the same distinct value in return.

To expand on the explanation, consider that a token is a unit of data stored on the blockchain, which in principle is immutable i.e., it can’t be changed or edited.

An NFT’s data certifies that it’s unique and therefore not interchangeable. But what makes it unique is that the token’s data references a one-off piece of media located somewhere else on the internet.

The NFT artwork is too large to be stored on a blockchain so it’s usually hosted on the InterPlanetary File System, a large peer-to-peer file storage system.

The data also contains a cryptographic signature that serves as proof of ownership and authenticity once an NFT is minted (creating the NFT on the blockchain), think of it as a digital certificate of ownership.

NFT projects for the most part are run by people who are truly passionate about pushing the envelope in regards to the conventional ideas about art and even crypto. NFT projects embrace non-technical people interested in investing in art and crypto by creating welcoming communities which promote transparency and democratic processes.

These communities are often headed by the project owners and management who truly care about the vision and future of the project and promote a community based on a healthy democracy where people share the same sentiment about an NFT project.

NFT projects are more often than not concerned with the long-term play of the project rather than a pump and dump scenario. Be sure to check out a project’s roadmap that details where’ they’re heading and what they stand for.

It’s inspiring to see a lot of the projects embracing charities and also favoring digital art for the sake of art that doesn’t need to be a physical asset. Many people can’t afford physical art or it would be impractical to keep art where they live. NFT projects level the playing field and allow people who previously could not own art to invest in a way that resonates with them.

The Stoner Cats project fell flat because it was an outright money-grab that saw celebrities such as Mila Kunis, Ashton Kutcher, Chris Rock, and others trying to cash in on the hype. The project featured a high mint price which already raised a red flag.

The project made the headlines as $790,000 was lost in gas fees due to allowing individuals/wallets to mint up to 20 NFTs per transaction which is out of the ordinary. Since the release, aftermarket Stoner Cats on OpenSea have struggled to attain a high floor price. The floor price sits just above the initial mint price which indicates that it was quite unsuccessful as a community project and primarily catered to whales.

Again NFT projects are focused on a community and welcome new members by offering a low mint price. That’s why you’ll also find that a number of project releases limit a wallet to minting 2 NFTs in a bid to be fair and to involve the entire community not just those with big bags.

What gives an NFT value?

In short, the market adds value to NFTs. But the digital signature also adds significant value to an NFT as it acts as both an autograph and ensures an NFTs authenticity.

The market adds value through:

These 3 points play an important role as you’ll often find that certain NFTs, CryptoPunks for example, are scarce, there were only 10,000 minted. They’re unique in that each NFT looks different compared to the next. They’re valuable because people are willing to pay money for them.

Another important point is that only one wallet can own an NFT at any given time, naturally, others can view the image, download it and even print it out but it simply remains a copy of an original.

What’s the point of owning an NFT?

So what’s the point of owning it if I can possess a digital copy of any NFT I like?

Just like the traditional art world where beauty is in the eye of the beholder, so too NFTs hold value for people as they can relate to an image, it resonates or speaks to them and sometimes that’s all they need. NFTs as artwork are more than speculative assets as they intrinsically hold aesthetic value.

There’s always the argument that people say they’ rather downloading a jpeg of an NFT than actually buying the artwork, but it falls flat when you compare NFTs and physical artwork. Think of any famous painting, only the original holds value and you certainly don’t own it by simply taking a picture of it on your phone or downloading an online image of it.

This concept also ties in with buying original art, it’s an investment, and the NFT’s value can fluctuate wildly. Much like crypto coins it could dramatically appreciate or depreciate to the point of being worthless. It’s a gamble and a lot of buyers have turned a tidy profit.

How do I gamble on an NFT?

With so many different NFTs available on different sites you’ll first need to identify what type of NFT you’re after. Most people that want to gamble on NFT’s are looking for a pump and dump scenario where hype drives the price of an NFT collection. Buy low and sell high.

That’s why you’re more likely to make more money if you manage to buy an NFT straight from a particular project’s launch.

Buying an NFT on an aftermarket site is not advisable as its value is questionable. Why is it still available? Surely if it was worth a short-term investment it would have been sold already. On top of that, you’re dealing with ETH volatility and you might struggle to get a buyer to take it off your hands.

But if you’re deadset on a specific NFT and didn’t manage to buy it on the NFT project’s site then an aftermarket site is your only option.

The top NFT marketplaces are currently:

Get the jump on a collection

So how do you get the jump on a popular collection and how do you guarantee that you’re in line to buy an NFT directly from the project site before they’re all sold out? The simplest way to get the scoop on new releases is to follow prominent crypto and NFT influencers on Twitter, you could also join NFT subreddits or NFT servers on Discord.

However, the odds of you being able to buy an NFT from a particular NFT project’s site on the release day are determined by how many other people are vying for a purchase. In some instances, up to 100,000 community followers are waiting to get their hands on the 10,000 NFTs usually made available during a project. For that reason, reservations systems have appeared on several project sites so that there are fewer people on the blockchain resulting in lower gas fees.

Gas fees are transaction fees that facilitate trades on the Etherum blockchain and it’s definitely a friction point due to its high cost. When you click on an NFTs check out button, your connected wallet (MetaMask is recommended) will open which reveals the price of the NFT and in most cases an exorbitant gas fee.

The sheer amount of competition on a project site also contributes to congestion on the Ethereum network that drives up gas fees. It’s all part of the gamble, but if you know what you’re doing, you’ll be able to reduce the risk of losing the ETH you paid for gas fees due to an unsuccessful transaction.

Many people lose ETH because they edit the gas fees fields incorrectly, which has the potential to burn all of the ETH set aside for gas fees. In other cases, people have lost their gas fees because they weren’t willing to spend more which equates to slower transaction speeds. Not only did they lose their gas fees but they also failed to secure a purchase because someone else’s gas fees were higher resulting in their transaction being processed faster.

As mentioned above, people stand to lose their gas fees if they edit the wrong fields. Within the Metamask notification window, navigate to the edit above the gas fee. From here the following options appear:

Do not edit the gas limit. Instead, open BlockNative to get a gas estimation. Copy the priority and max fees from the 99% probability option and input them into your Metamask gas fees fields.

The chances of your transaction being successful are now drastically improved, but there are no guarantees as bots also purchase NFTs when they’re initially released.

Is it worth it?

It’s certainly worth it to gamble on NFTs. If luck is on your side you stand to come away with a valuable NFT that you can flip for a profit if you’re so inclined. Many people prefer to hodl their NFTs as a store of value and many project reward them for it with airdrops. Others enjoy the sense of community and being a part of a revolutionary movement.

However, you may end up losing your gas fees and walk away empty-handed but that’s just part and parcel of buying NFTs. As with all gambling, NFT gambling carries a high risk and you should only spend what you’re willing to lose.